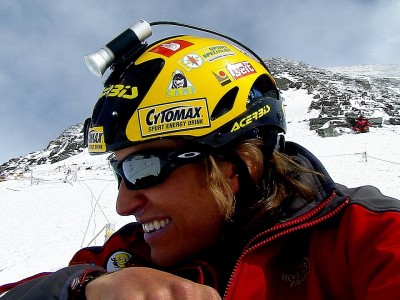 Of the approximately 5,000 people who have climbed Mount Everest, only a few have made the decision to paraglide back to the bottom. So far, no one has chosen a wingsuit as their means of transportation back down. Until now.

Joby Ogwyn is currently preparing for his jump off the great mountain that will take place in May.

He will be outfitted with a wingsuit equipped with cameras that will record footage of the views. Ogwyn, 39, was 24 the first time he climbed Everest. This accomplishment came along with the title of becoming the youngest American to reach the summit.

Ogwyn, star of the National Geographic show Adventure Wanted, has been able to scale the mountain in nine-and-a-half hours, and carried out a test jump from an airplane three years ago in preparation for this upcoming stunt.

He said once he reaches the summit, he’ll change into his wingsuit and helmet, “and I will be out of there,” he told CNN. He said he plans to reach a speed of about 150 mph during the 10,000-foot descent to the base camp. The Discovery Channel plans to broadcast his flight live.

“I’m very scared. I think it’s the fear of death or destruction that kind of keeps you above that,” he said. “But I’m not afraid to die. I’m not afraid to live my life on my own terms. And this is my dream and I am willing to risk everything to make it happen.”

Image from Hueypriest on Wikimedia Commons