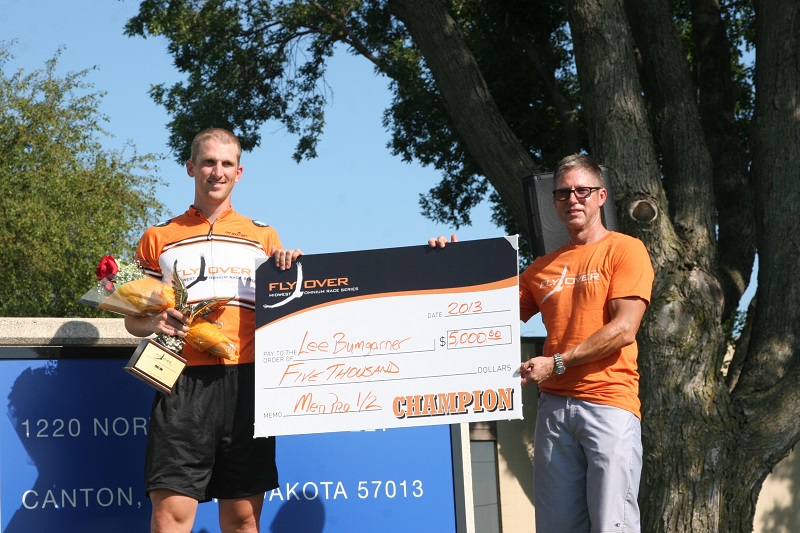 Based on the amount of early interest and ongoing buzz around this year’s upcoming Midwest Flyover, Lee Bumgarner, last year’s champion, might not have an easy time defending his title. A number of elite race teams from Wisconsin, Illinois and Kansas plan to race the Pro1/2 class this year, and Flyover organizers say they have heard from other races that would like to be included in the Flyover series.

Today race organizers announced the locations, dates and initial sponsors for the second annual Flyover Championship, and participant and sponsor interest is already heavy. Legacy Electronics, Inc has agreed to be the presenting sponsor, allowing organizers to increase the Flyover purse to $30,000. Along with the individual race awards, trophies, and prizes, the collective purse may soon exceed $100,000 in racer benefits. “It’s exciting to be part of a dynamic race series,” said Jason Engle, CEO of Legacy Electronics, Inc., “that not only promotes competitive cycling, but also promotes a healthy lifestyle.”

“After the great reception to last year’s inaugural Midwest Flyover,” said race director Tim Putnam, “we’re excited that added sponsorship funding allows us to extend winner recognition deeper into the leader board. What’s more, indications are we may have additional last-minute sponsors stepping in, and this could become one of the richest amateur competitive cycling race series in North America.”

To date, five sponsors have signed on including:

As with last year’s series, the 2014 Midwest Flyover will bring together five separate cycling events in Iowa, Minnesota, Nebraska, and South Dakota starting in April and ending in August. The goal of The Flyover is to synergize and cross-promote the efforts of the individual races and establish the richest regional amateur race series promoting participation in Midwest cycling events.

Athletes are scored on their best four Omnium results in any of the five qualifying races. The five races, in chronological order, include:

All events are sanctioned by USA Cycling, which provides oversight for the Olympic training team and the majority of all cycling races in the USA. USA Cycling is including The Flyover Series information in their events, and will oversee registrations. Larry Martin, USA Cycling’s Midwest Regional Coordinator, said, “The Flyover Series, in its second year, provides a great opportunity for growth, bringing together the best riders in the region, covering a variety of venues in a four-state series.”