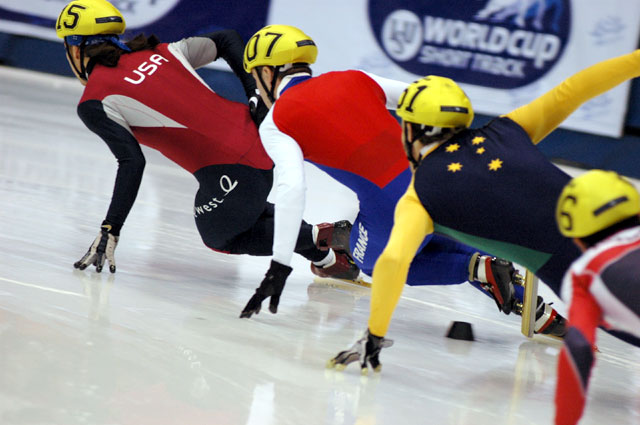 Speedskaters racing around a curve in 2004.

Designed by Under Armour and defense contractor Lockheed Martin, the “Mach 39” suits were expected to help the athletes perform better than they ever have. What resulted from the first six events, however, was a complete disappointment.

Many of these athletes went into the Olympics with high hopes of coming home with a medal, and their skating records made many others think the same thing. But when none were able to snag a win, people began to question if the problem was with the athletes or the gear they were using.

Under Armour explained the details of the suit that were made to reduce friction by 65 percent, reduce wind resistance, and decrease body heat.

“There’s absolutely no doubt in my mind that this is the most scientific suit in the whole world,” said Patrick Meek, a US speedskater, according to USA Today. “These guys made F-16 fighter jets. If they can invade Afghanistan and Iraq, they can build a speedskating suit.”

While it hasn’t been determined if the suits are at fault, the International Olympic Committee gave US Speedskating permission to wear the old suits for the remainder of the Winter Olympic Games. The old suits were worn during the last World Cup season and were also designed by Under Armour.

The Wall Street Journal reported that the vents on the back of the suit allow heat to escape and air to enter, which created a drag preventing the athletes from reaching the speeds they normally do.

But some athletes were quick to take the blame for their poor performances.

“I would like to think that it’s not the suit,” Shani Davis, the two-time gold medalist who finished eighth in the 1,000-meter, told The Wall Street Journal. “I’d much rather blame myself. I just wasn’t able to do it today, but other people were.”

The next speedskating event will be held tomorrow.