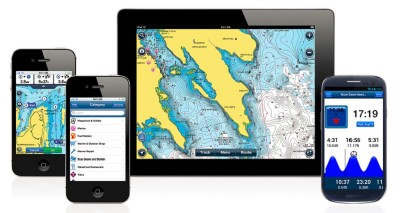 Navionics, the leader in content and location-based services for the recreational boating and outdoor markets, announced today the release of its newest app, Navionics Boating. Offering the same great detail found on GPS chartplotters, the app is available as a free download from the iTunes App Store and Google Play for Apple and Android mobile devices. Navionics Boating users can conveniently shop In-App for affordable charts of anywhere in the world, and have the ability to purchase and seamlessly merge additional coverage as needed. Advanced feature upgrades such as Nav Module, Autorouting and Advanced Map Options are available across all regions providing added savings and convenience.

“At Navionics we’re boating enthusiasts ourselves and we have a passion for the outdoors that’s reflected in our feature-packed mobile app offerings,” said Giuseppe Carnevali, president, Navionics. “We designed the Navionics Boating app as a convenient and easy-to-use content tool that will enhance each on-the-water adventure.”

Each of the chart regions purchased within the Navionics Boating app can be further enhanced by Navionics+, which adds award-winning SonarCharts and 12 months of continuous updates, meaning more than 2,000 edits every day and improvements supplied by Navionics and the entire community of more than one million users. Navionics+ and other upgrades like Nav Module, Autorouting and Advanced Map Options are currently available on Apple devices, and coming soon to Android.

For customers who already own Navionics Marine & Lakes apps, the latest update offers the same new Navionics Boating features. Current users can simply update their Navionics iPhone and iPad apps to version 6.0, and Android to version 3.1 or greater. For more information on the all-new Navionics Boating app or to learn more about Navionics and its entire product line, please visit www.navionics.com.