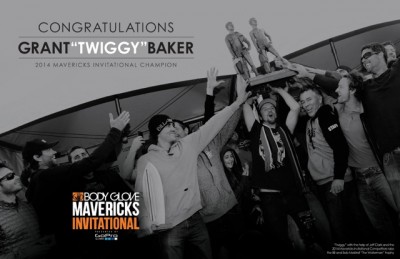 Body Glove International would like to congratulate Grant “Twiggy” Baker on his victory at Mavericks this past Friday, after scoring a perfect 10 point ride in the semi-finals. Baker dominated from the beggining winning every heat he was in, in almost perfect conditions with waves 30-40 feet.

The final heat was televised live for the first time in history and was also the second most watched surf competition ever, according to TheSurfChannel.com. Body Glove would like to thank Jeff and Cassandra Clark, Rocky Raynor, Brian Overfelt, and the Mavericks Invitational crew. Also a special thanks to the town and people of half moon bay and all the Mavericks locals.