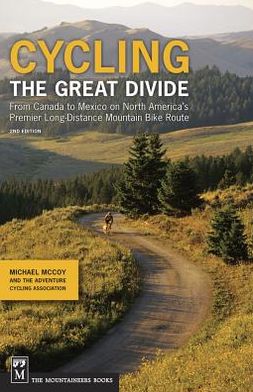 Amidst surging interest in off-pavement touring and bikepacking, Adventure Cycling Association celebrates the publication of the second edition of Cycling the Great Divide: From Canada to Mexico on North America’s Premier Long-Distance Mountain Bike Route by Michael McCoy (The Mountaineers Books, 2013).

Cycling the Great Divide is a detailed travel guide for the organization’s popular Great Divide Mountain Bike Route. McCoy researched and mapped the route in the 1990s and subsequently wrote the guidebook, first published in 2000.

“The popularity of dirt-road touring and ‘gravel grinding’ has surged over the past few years,” author McCoy said. “A fair share of this growth can be attributed to the attention received by the Tour Divide, a race that was conceived by the very fact that the Great Divide route existed, that it had been researched and mapped. The trend has even inspired a new breed of off-pavement touring bike, epitomized by the Salsa Fargo and the aptly named Co-Motion Divide.”

The second edition of Cycling the Great Divide includes updated information for the entire route and covers 254 miles in Canada that have been added to the route since the first edition. Many traveling cyclists use the book in tandem with Adventure Cycling’s cyclist-specific maps for the route.

“Like the first edition of Cycling the Great Divide, edition two provides a wealth of background on history, natural history, and geology — as well as navigational and logistical tips — that simply won’t fit on the Adventure Cycling maps,” McCoy said. “Conversely, the maps in the book, because of the constraints of page size, are nowhere near as detailed as the dedicated maps are. In other words, riders are well advised to carry both the book and the Adventure Cycling maps.”

The longest off-pavement route in the world, the Great Divide Mountain Bike Route traces the spine of the Rocky Mountains for 2,774 miles from Canada to Mexico, traversing Alberta and British Columbia and western landscapes through Montana, Idaho, Wyoming, Colorado, and New Mexico. Cyclists who tackle it in its entirety face 200,000 feet of elevation from start to finish, akin to summiting Mount Everest seven times. However, shorter tours on the route are very possible. To accommodate trips of varying lengths, Adventure Cycling’s maps for the route are broken into seven map sections, each of which covers between 250 and 500 miles of the route.

For a glimpse of what to expect from the Great Divide Mountain Bike Route, check out Adventure Cycling’s new Great Divide route highlights video, produced in partnership with Co-Motion Cycles and Revelate Designs.