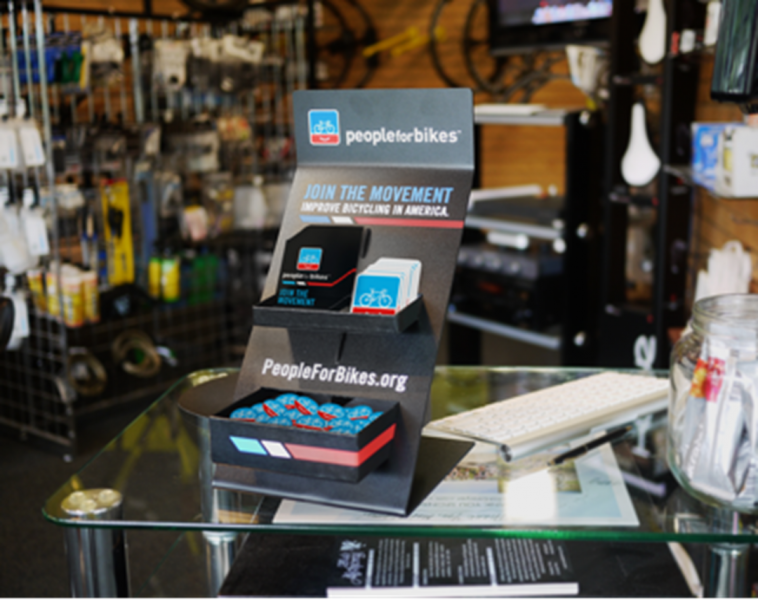 Along with the announcement of streamlining to a single brand, PeopleForBikes launched a new retailer membership program at Interbike 2013. Instead of paying annual dues, retailer members will now support PeopleForBikes by asking their customers to join and donate to the organization. The new format was a clear hit: more than 715 retailers have already signed on.

Members receive a redesigned point-of-purchase kit, which provides the iconic buttons, stickers, and info cards for customers who sign up for PeopleForBikes. Since the launch of PeopleForBikes, retailers have collected more than 150,000 members using older versions of the kits.

In addition to asking customers to join PeopleForBikes for free, retail members are encouraged to participate in a Retail Roundup program, where customers are asked to round up their purchase to the next dollar with a donation to PeopleForBikes. The Roundup program is already in place at retailers like Sunnyside Bicycles in Fresno, California.

“We believe in bikes, and we believe in the PeopleForBikes mission. Asking our customers to round up their purchases was a very simple way for us to support and strengthen their cause,” said Vanessa McCracken, owner of Sunnyside Bicycles in Fresno, CA. “The response from our customers has been overwhelming!  99.7% have agreed to round up, and we’ve raised nearly $2000 for PeopleForBikes in just six short months. Little by little, a little becomes a lot—collectively, we as retailers could make a significant difference!”

“The Roundup program has potential to bring a substantial amount of new funding to the advocacy movement without relying on additional industry investment,” said Tim Blumenthal, President of PeopleForBikes. “PeopleForBikes is doubling every dollar raised through the program and distributing the funds back to worthy community bike projects through our Community Grants Program.”

PeopleForBikes membership benefits retailers by bringing additional reinforcements and resources to the movement, creating more opportunities to ride. Participating retailers are also highlighted on the newly redesigned PeopleForBikes website and with select communications to individual members.