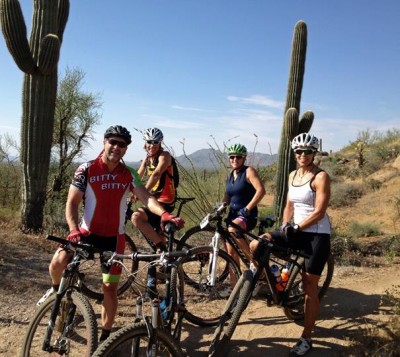 Pure Adventures launches its first salvo of to-be 20-plus self-guided cycle tours in the American West bringing a new level of independent travel to this hot vacation sport.

Pure Adventures is bringing its signature blend of top-of-the-line travel planning and execution in iconic destinations domestically for the first time this autumn. It is launching a first salvo of to-be 20-plus bicycle tours in the American West that will bring a new level of independent travel to this growing vacation sport.

Pure Adventures is focusing first on the Southwest for early winter through early spring adventures where warm temperatures are expected to entice cyclists from both the United States and abroad. Tours range from two to six days in such popular snowbird destinations as the mountainous Sonoran desert around Scottsdale, AZ, the red rocks of Sedona, and Death Valley, CA.

“Clients who travel with us to Europe ask, ‘What about self-guided tours in the US?’” said Loren Siekman, founder/owner. Because of the focus on this country’s National Parks, he anticipates that the international market will also be enthusiastic about his company’s new stateside itineraries.

An example of one itinerary is the Guided/Self-Guided Sonoran Desert Mountain Biking Tour. This trip combines the joys of independent, self-paced cycling and catered wilderness camping. Guides take care of setting up the camp (including menus and ingredients for self-prepared meals), supporting rides and shuttling participants to trail heads all over the valley. Local experts will enhance the trip by taking care of the camp chores, providing entertaining natural history interpretation, plus riding tips for anyone interested in expanding their skills.

Guests transfer from Scottsdale to McDowell Sonoran Preserve where they are fitted with bikes. The first ride is a raucous descent down the gradual east slope of the McDowell Mountains before rolling into a well-appointed, private base camp. Day two is the McDowell Mountain Regional Park that has single track created just for mountain bikers. Day three moves to another part of the desert, flowing through the whoopty-doos and carving the bermed turns. The Black Canyon Trail on day four follows a National Recreation Trail and traverses along the foothills of the 7,000-foot Bradshaw Mountains to treat riders to some of Arizona’s finest cactus-studded views and a taste of the best new single track in the country. On day five guests head back to Scottsdale.

The per person rate of $1,065 is based on a minimum of four riders. Included are round-trip transportation from Scottsdale; all permit, camping and park entry fees; four nights lodging at a deluxe, safari-style base camp (double occupancy tents with comfortable sleeping pads); self-prepared meals (food provided) from lunch on arrival to departure day; snacks and bottled water; front suspension mountain bike – Giant Revel 1 or equivalent; gloves; helmet and pedals when requested.

Pure Adventures has formed a new exclusive partnership with AOA Adventures, also based in Scottsdale, AZ, which “puts instant infrastructure and experience in place to launch our tour offers in North America,” Siekman said. AOA Adventures supplies custom outdoor services and logistical assistance to groups of all types from corporate to charities and other tour operations.  The operation offers the Southwest’s most diverse and extensive (over 400) bicycle rental fleet. Other equipment rentals include kayaks, camping and backpacking gear.

Siekman noted that all of the company’s support personnel and guides (who conduct initial orientations) are certified and trained as Wilderness First Responders and some are EMT’s, NOLS graduates, as well as pro level mountain bikers, triathletes and serious outdoor practitioners. The company uses quality vehicles and adheres to a deluxe, leave-no-trace camping format.