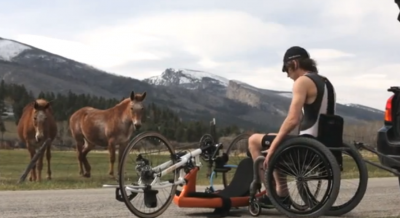 If he succeeds, Joe Stone will be the first quadriplegic man to ever complete an Ironman triathlon.

It was a mere three years ago that Joe Stone became paralyzed during an extreme sports accident at Missoula, Montana’s Mount Jumbo. He was speed flying about 200 to 300 feet above the ground, but complications with his canopy sent him crashing into a mountainside at 40 miles per hour.

The accident left him with four broken ribs, a liver laceration, bruised lungs, eight broken vertebrae, and spinal cord damage. He spent almost a month in an medically-induced coma, shedding 35 pounds of muscle in that time span. Stone is considered an incomplete C7 quadriplegic, which means he still has partial motor function and sensation below the neck.

Despite the accident that changed his life, Stone refused to let it stop him from experiencing the outdoors.

According to an article published by the Missoulian, just one year later he climbed Glacier National Park’s Going-to-the-Sun Road Road on a three-wheeled, hand-propelled bicycle.

His most recent goal is to become the first wheelchair-bound quadriplegic to finish an Ironman triathlon.

“The cool thing about being disabled is there’s a lot of opportunity in becoming the first at something,” 28-year-old Stone told the Missoulian.

He said that prior to the accident, he never considered participating in a triathlon or marathon.

He began training back in March, and said he needs to stay focused so he can become the first quadriplegic person to complete am Ironman at the Nov. 2 race in Panama City Beach, Florida. For the running portion, he will be using his racing wheelchair.

In addition to training for the race, Stone is also documenting his journey. Watch the trailer for the forthcoming documentary below.

For more information about Stone, check out his website.

Image is a screenshot from video by Joe Stone on YouTube