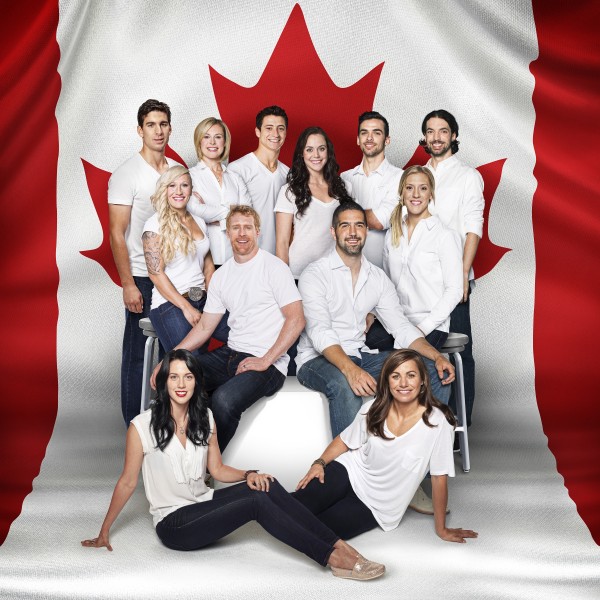 In addition, P&G announced the launch of the “Thank You Mom” campaign, an integral part of the company’s worldwide partnership with the International Olympic Committee (IOC). P&G, as the “Proud Sponsor of Moms”, will once again use its voice to celebrate and thank moms in Canada and around the world for all that they do for their children every day.

Inspired by their commitment to excellence, the P&G-sponsored athletes are:

“These 12 Canadian athletes are some of the best in the world at what they do and their commitment to excellence inspires us,” said Thom C. Lachman, President, Procter & Gamble Canada. “When a P&G brand supports an athlete we celebrate more than just their performance at sport. We also celebrate their everyday journeys and the amazing moms who helped them along the way.”

In recognition of all that they do, P&G will be saying “Thank You Mom” by releasing new videos in its “Raising an Olympian” series. These tributes feature athletes and their moms – including defending Olympic gold medallist, Jon Montgomery and his mom, Joan – and provide a glimpse of their everyday journeys together on the path to the Olympic Winter Games.

“I admire P&G for acknowledging and thanking moms for the little, yet important, things we do for our children to help them achieve their dreams,” added Joan Montgomery, mother of Olympic gold medallist in Skeleton, Jon Montgomery. “By sharing our journey to Sochi, I hope we inspire other Canadian parents to work together to make sure their kids never stop chasing their dreams.”

The sponsorship program also marks the extension of P&G’s partnership with the COC for the next year. After initially uniting with the COC in 2011, P&G is excited to continue the robust relationship which will see them maintain their presence at Canada Olympic House at the Sochi 2014 Olympic Winter Games as well as provide essential personal products and services to the Team while in Russia.

“The COC is thrilled to continue their partnership with P&G as we head toward the Sochi 2014 Olympic Winter Games,” said Marcel Aubut, Canadian Olympic Committee President. “The sponsorship of Olympians and the recognition of the athletes’ moms with their successful ‘Thank You Mom’ campaign make us proud to again join forces with an organization that undeniably values our country’s sporting heroes.”

For regular updates on the athletes’ progress – and what their moms have to say – Canadians can visit www.pg.ca/moms or visit us on Facebook at P&G Everyday Canada.

More about the athletes:

Meghan Agosta-Marciano (Ice Hockey) sponsored by Bounty. Originally from southwestern Ontario, Meghan is a two time Olympic gold medallist who holds the record for scoring three hat-tricks during The Winter Olympics. She was also selected as the MVP of the Vancouver 2010 Olympic Winter Games and will continue to play an integral role as Team Canada tries for a fourth consecutive gold medal at the Sochi 2014 Olympic Winter Games. While Meghan doesn’t need help cleaning up on the ice, Bounty is proud to help her tackle her biggest spills off the ice.

Tessa Bonhomme (Ice Hockey) sponsored by P&G. Tessa, a renowned defenceman, was a pivotal member of the gold medal winning Team Canada at the Vancouver 2010 Olympic Winter Games. A native of Sudbury, Ontario, she was also the first overall selection in the inaugural draft for the Canadian Women’s Hockey League (CWHL) in 2010.

Rosalind Groenewoud (Freestyle Skiing) sponsored by P&G. Rosalind hopes to make history in Sochi in the Women’s Freestyle Ski Halfpipe as this will be the first time the sport is included in the Olympic Winter Games. Ranked 1st in her sport in 2012 and 2nd in 2013, she is a favourite to win gold. Rosalind is a six-time medallist at the X-Games, most recently capturing silver in 2013 and two gold medals in 2012 (Aspen and Tignes) in the superpipe.

Charles Hamelin (Short Track Speed Skating) sponsored by Tide, Swiffer and Duracell. Charles is set on repeating podium success in Sochi, having captured two gold medals at the Vancouver 2010 Olympic Winter Games in the 500m short track and short track team relay. He also holds the current world record in the 1000m. Charles and his brother, François, are teaming up with P&G’s high performance household products to allow them to focus on their top priority – going for gold.

François Hamelin (Short Track Speed Skating) sponsored by Tide, Swiffer and Duracell. At the Vancouver 2010 Olympic Winter Games, François stood atop the podium along with his older brother, Charles, as part of the gold medal winning team in the short track team relay. He has also had success at both the World Championships and World Team Championships and is intent on delivering a breakthrough performance at the Sochi 2014 Olympic Winter Games.

Kaillie Humphries (Bobsleigh) sponsored by P&G. Born in Calgary, Kaillie is the two-time defending World Champion in the two-woman bobsleigh and the reigning Olympic champion. In fact, her win at the Vancouver 2010 Olympic Winter Games went into the record books as she and brakeman Heather Moyse became the first Canadian women to win gold in the bobsleigh.

Jon Montgomery (Skeleton) sponsored by P&G. A native of Russell, Manitoba, this five-time Canadian national champion and winner of the gold medal at the Vancouver 2010 Olympic Winter Games has his eyes set on defending his title in Sochi. Jon is partnering with P&G to thank the ultimate fans – the moms behind the athletes – who are the real secret to every Olympian’s success.

Maëlle Ricker (Snowboard Cross) sponsored by P&G. At 34, Maëlle is the defending Olympic champion in ladies’ Snowboard Cross and winner of 23 World Cup medals in the sport – 12 of those being gold. Sochi 2014 will mark her fourth Olympic Winter Games and comes on the heels of capturing her first-ever World Championship title in 2013.

John Tavares (Ice Hockey) sponsored by Gillette. At 23, Tavares is considered one of the best players in Canada and is hopeful to make Team Canada’s roster and play in his first Olympic Winter Games in Sochi. He is a two-time gold medallist at the World Junior Ice Hockey Championships and was selected first overall in the 2009 NHL Draft, and was most recently named captain of the New York Islanders. Gillette is proud to team up with Tavares, knowing that the right preparation can make a world of difference in those precise moments in the pursuit of gold.

Tessa Virtue and Scott Moir (Figure Skating) sponsored by Pantene, COVERGIRL, Olay and Crest. The youngest ice dancing pair to ever win Olympic gold, Tessa and Scott aim to continue their success in Sochi. Natives of southwestern Ontario, this ice dancing duo hold two World Championships, two Four Continents Championships and a gold medal from the Vancouver 2010 Olympic Winter Games – not to mention that they are also the current world record holders for Original Dance score. In honour of their beauty and grace both on and off the ice, P&G is proud to support Tessa and Scott at the 2014 Sochi Olympic Winter Games.

Greg Westlake (Sledge Hockey) sponsored by P&G. At 27, Greg is a veteran of the Paralympic Winter Games. In 2006 he was a vital member of Team Canada as they captured gold in Torino. After a fourth place finish at Vancouver 2010, Greg is determined to lead Team Canada back to the top in Sochi. In recognition of all that his mom has done throughout his career, Greg is partnering with P&G to say “Thank You Mom.”