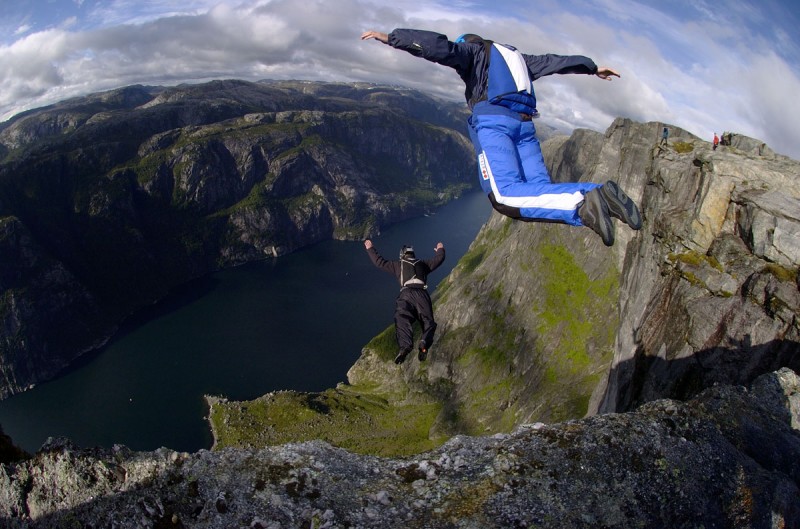 Combining BASE jumping with another sport has become not only extremely popular, but an easier way to set a record.

A number of people have fulfilled all of the categories represented by the acronym BASE—Building, Antenna, Span, and Earth—but some jumpers are taking the challenge of completing all four to the extreme with their unusual jumps.

Marco Waltenspiel recently used a boat as his Building, most likely not for the distance that was covered, as it was only 42 meters (138 feet), but more so because of its uniqueness.

The Austrian skydiver said he first considered the idea of jumping from the unsteady platform of a yacht earlier this summer. Though the low height may have led some to believing the jump was not dangerous, it was actually one of the most daring.

Parachutes need a certain amount of altitude in order to be deployed correctly, and the boat’s sail was thought to pose a serious danger if the parachute were to get tangled in it. What Waltenspiel ended up doing was use a “deployment bag,” which was held by an assistant who ensured it was opened right after he jumped from the platform.

According to an article posted by Red Bull, once he was under the wing, he was able to easily clear the rigging of the boat and land in the water safely.

Although the jump did not break the record for shortest BASE jump, it was recorded as one of the shortest in history.

“The feeling of free fall, and in addition to being above the sea, is simply indescribable,” 29-year-old Waltenspiel told Red Bull after the jump. “If the opportunity presents itself, I would love to jump from a freighter.”

Another Austrian BASE jumper, Felix Baumgartner, is known for setting the record for the lowest BASE jump, at 29 meters (95 feet) at Rio de Janeiro’s Christ the Redeemer statue. However, controversy ensued because of several factors. First, Baumgartner recorded the height of the statue as the height of the jump, although he landed on a slope below the statue’s feet. Secondly, other BASE jumpers claimed to have completed the jump, but chose to avoid publicity. Whether or not his jump actually made the record, it’s clear Baumgartner is a thrill seeker.

“The challenge of my life is to figure out how far I can take it,” he said in a video posted by Red Bull. “It’s an easy statement to say you want to become the best BASE jumper in the world, but it’s not easy to get there.”

Other, more traditional jumpers are focused solely on height. This past May, Russian daredevil Valery Rozov became the jumper with the highest recorded BASE jump, at 7,220 meters (23,688 feet) above sea level off the north side of Mount Everest.

Some record-holders have tried to combine several sports into one during their BASE jumps. In 2005, Norwegian free skier and BASE jumper Karina Hollekim became the first female athlete to complete a ski BASE. A year later, she fractured her legs in 21 places after her parachute failed during a routine jump—and accident that doctors said would leave her unable to walk again. Although she proved them wrong and is back to skiing, it shows that serious dangers are posed by participating in the sport.

Even well-known slackliner Andy Lewis has found a way to implement BASE jumping into his sport. He often jumps after completing a series of tricks on his line.

Check out the video below of Lewis BASE jumping off his slackline.

Image from Xof711 on the Wikimedia Commons