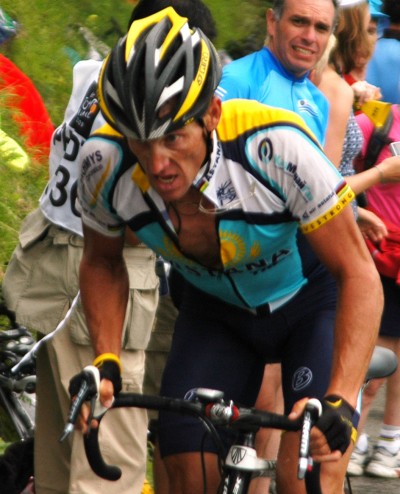 Lance Armstrong at stage 17 of the 2009 Tour de France on the Col de la Colombière.

Set to be released in theaters on November 29, The Armstrong Lie has already been viewed at several film festivals internationally. While the documentary was originally titled The Road Back by filmmaker Alex Gibney who followed the athlete for four years, he altered the entire angle when Armstrong finally admitted to doping in 2012. Gibney planned to capture the cyclist’s emotions that accompanied his return to the sport in hopes of winning his eighth Tour de France title after temporary retirement from the end of the 2005 Tour de France until 2009.

“I like to win, but more than anything, I can’t stand the idea of losing because losing—to me—that equals death,” Armstrong says in the opening of the trailer.

According to the trailer’s description, “Lance Armstrong’s story was legend—he’d beaten cancer and went on to win seven Tour de France titles. This film follows the legendary cyclist Armstrong for four years, starting from 2009, to chronicle his return from retirement and quest to win an eighth title. In 2012, filmmaker Alex Gibney was also there when Armstrong admitted to doping, following a U.S. federal criminal investigation. Interviewees include former teammates and doctors, many of whom have never before spoken to the media about Armstrong’s bombshell.”

“He had lied to me, straight to my face, all throughout 2009,” Oscar-winning filmmaker Gibney said in the trailer. “When the truth came out, I told him he owed me an explanation.”

Armstrong agreed to have another interview, but this time telling the truth.

“I was certainly very confident that I would never be caught,” he said. “Cancer survivor overcoming the disease comes back and wins…yeah, they liked that.”

Several of the people featured in the documentary make comments about the athlete’s intimidating nature, and how it was easy to believe him because of the confidence he exuded.

“That celebrity is what gave him such immense power,” one man said.

Gibney explained, “This is not a story about doping, this is a story about power, and the story became hanging on to that power.”

Image from McSmit on the Wikimedia Commons