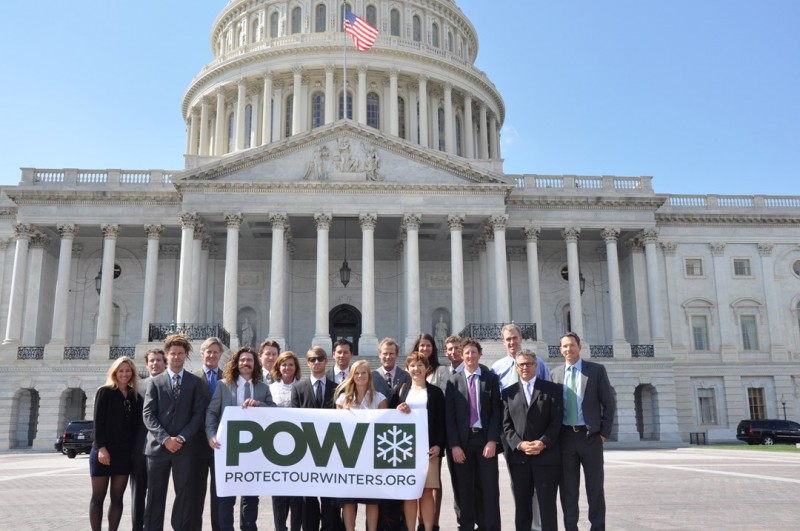 K2's Matt O'Laughlin with the POW team outside the Capitol.

K2 Sports joined forces with Protect Our Winters (POW) and the Natural Resources Defense Council (NRDC), a group of high profile leaders and athletes in the outdoor and snowsports industries, for meetings with Washington officials this week to bring attention to the issue of climate change and its impact on the industry as a whole.

After a round of meetings with Senators from states known for winter sports, the group held a press conference outside the nation’s Capitol. Rep. Henry Waxman (D-Calif.), the ranking member of the House Energy and Commerce Committee which oversees issues such as climate change, hosted the group as they led a discussion on topics related to the shrinking of the world’s snowpack.

Matt O’Laughlin, senior engineer at K2 Skis, heads up the company’s Sustainability Team and was onsite in D.C. to show K2’s support for this cause. “We’ve been snow farmers for 50+ years,” said O’Laughlin. “The changing climate directly impacts the livelihood of our employees, athletes, retailers, the recreation of our customers and the health of our business,” he noted. “It should be apparent as we stand side by side with industry peers that this is a serious situation that affects all of us across the board.”

In addition to the President’s Climate Action Plan, the group specifically advocated to support the United States Environmental Protection Agency’s proposed Carbon Pollution Standard released on September 20, 2013. While in Washington, the Protect Our Winters team and O’Laughlin brought their experiences from the mountains to the forefront in order to drive the battle against climate change. Among the many meetings, O’Laughlin was able to discuss the impacts happening in Washington State, where K2 Sports is headquartered, with Senator Patty Murray’s (D–Wash.)staff.