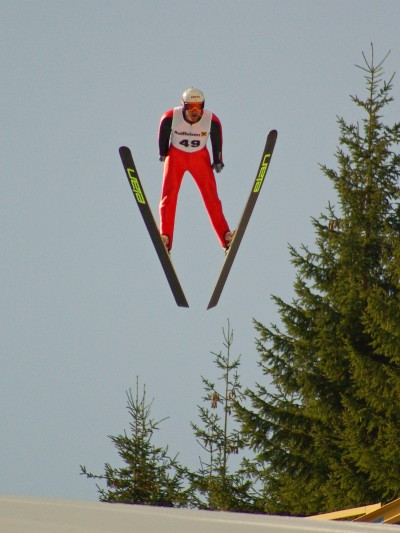 American skier Bryan Fletcher, who trains at the Center of Excellence, competes in 2008.

The U.S. Ski And Snowboard Association’s Center Of Excellence opened on May 1, 2009 in Park City, Utah and since then has been working to train athletes for the Sochi 2014 Olympic Winter Games that will be held in February.

The Center of Excellence came to fruition because of private donations from the USSA’s Legacy Campaign, which is an endowment fund that was started in 1999. It does not divert money from athletic programs, and actually raises funds separately to benefit these programs. The 85,000-square-foot building houses strength-training areas, a gymnasium, ski and snowboard ramps, trampolines, a nutrition center, as well as facilities dedicated to recovery and rehabilitation. There is also a separate educational area with a computer lab, science lab, and multimedia rooms that are used for both performance analysis and workshops.

According to an article posted on Team USA, last week Bryan Fletcher was able to skate ski in the same environment he will compete in on the Sochi Nordic combined cross-country course—except that he was in the Center of Excellence rather than Russia. He used a plastic mouthpiece to breathe, which was attached to a hose. He was roller-skiing on a large treadmill while breathing the oxygen that is at the same saturation level he will be faced with in Sochi.

Dr. Jim Stray-Gundersen was the one who designed this “technology treadmill,” and he is now serving as the U.S. Ski Team’s sports science adviser. Simply put, the device is meant to simulate altitude at a number of cross country ski venues all over the world. Trainers can evaluate how efficient athletes are at utilizing the available oxygen, the article stated. It is currently the only treadmill of its kind in the world, which is just one of the many technological advancements that attracts athletes to the Center of Excellence.

“I really didn’t have an appreciation for the impact [the Center of Excellence] would have on the organization,” said USSA CEO Bill Marolt in the article. “It had a major impact in 2010. And the impact and the effect of this building continue to grow.”

The map details where each event will be held for the Sochi Olympic Winter Games 2014. (Click to enlarge image).

Marolt said the British, Australians, and Canadians have similar facilities to train their Olympic athletes, but Utah’s set-up is above the rest.

One of the biggest fans of the facility is 2014 Olympic skier Travis Ganong.

“It’s just been a huge resource for all the athletes,” he said in the article. “We’ve become more professional because of it, just more dedicated to our sport. It’s top of the line. There’s nothing else we could want.”

“I work out there, I trampoline there, I play basketball there, I eat there, I recover there, I get my physical therapy there,” she said in the article. “I’m there four to five hours every day in addition to my other training at the water ramps. It’s the best facility we’ve got. It’s very impressive, it’s state of the art, and I’m so grateful to have it.”

A big feature of the center’s creation is that it’s modeled after a college atmosphere. It has the USSA Team Academy in house, which is a high school that opened this year, and older athletes are given the opportunity to enroll in Westminster College that is located in Salt Lake City.

“It makes sense to be here,” said three-time Olympian Marco Sullivan, 33, in the article. He is training and also pursuing a degree at Westminster. “I come up 8 a.m. and leave 5 p.m. You really can’t get that anywhere else.”

Check out a 2009 video of the Center of Excellence grand opening below.

Image from Christian Jansky on the Wikimedia Commons