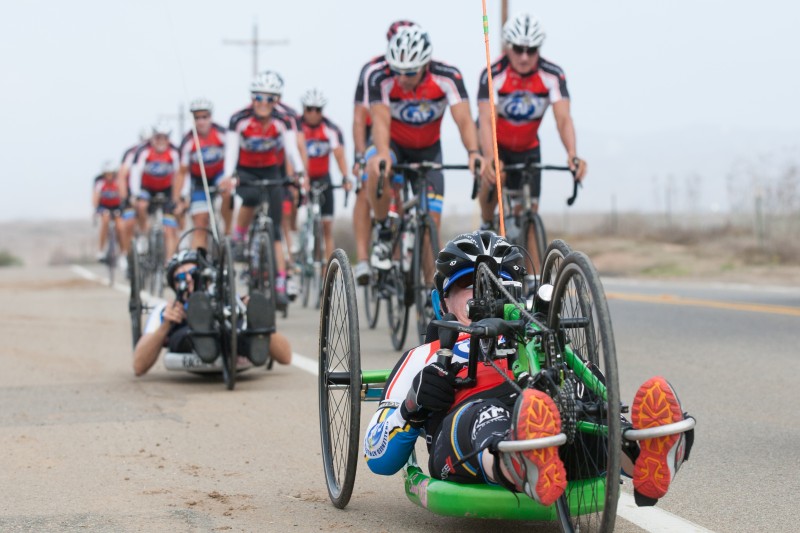 Beginning September 20, more than 45 cyclists – including five physically challenged athletes – will depart Westlake Village for the Challenged Athletes Foundation’s (CAF) Inaugural Cycling Challenge – Ojai Valley. The three day event will feature options of a 166 or 201 mile journey and up to 15,500 feet of climbing, all to raise funds and awareness for physically challenged athletes.

The course, which begins in Westlake Village, will include iconic portions of past Amgen Tour of California events, such as the Balcom Canyon pass and epic climbs through the Santa Monica mountains. On this ride, it’s not just the ocean views, descents and challenging course that make this a one-of-a-kind event. It is a journey that combines a passion for cycling with the chance to change perceptions. Participants will ride side-by-side with inspirational and talented challenged athletes – including amputees and individuals with paralysis – and witness firsthand the impact of their support. The funds raised through the CAF Cycling Challenge – Ojai Valley directly aid CAF’s mission to support those with physical disabilities through grants for adaptive equipment, training and competition expenses.

Participants taking part in the sold-out event include NBA legend and Hall of Famer Bill Walton and inspiring challenged athletes such as:

“The CAF Cycling Challenge – Ojai Valley offers enough climbing and distance to challenge even the most seasoned cyclists,” said Virginia Tinley, Executive Director of the Challenged Athletes Foundation. “The fact that a number of our challenged athletes will be joining for the event truly demonstrates that there is no limit for what those with physical challenges can accomplish.”

The CAF Cycling Challenge – Ojai Valley begins Friday, September 20 at 7:00 a.m. as participants enjoy a kick-off breakfast at the Four Seasons Westlake Village. A festive departure ceremony will see the riders at 9:00 am as they embark for their journey. Friday and Saturday evening will treat the riders to a stay at the Ojai Valley Inn and Spa before their return journey to Four Seasons Westlake Village Sunday afternoon for a final ride-in celebration.