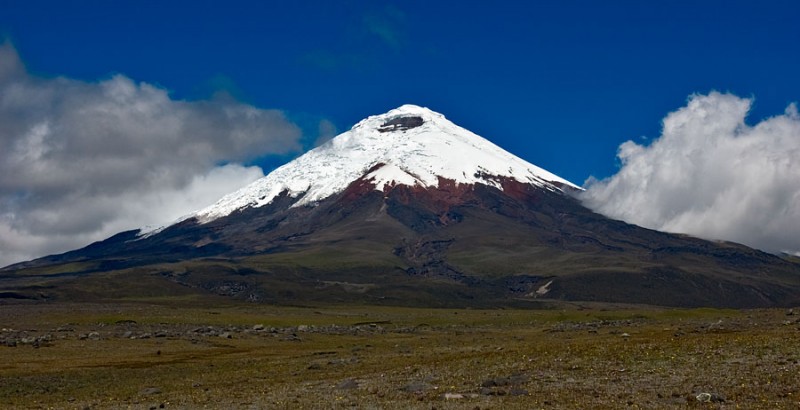 The Cotopaxi MTB Challenge, scheduled for November 16-17 in Ecuador, is the only race in the world that guides riders on a route around an active volcano, adding adrenaline to a sport that already requires plenty of stamina on its own. This year marks the ninth time the race, also known as Vuelta al Cotopaxi, has been run, and this time approximately 500 cyclists will be participating.

This race is well-known throughout Ecuador and is considered one of the most challenging in the world. Riders cover about 60 to 70 kilometers each day, approximately 37 to 43 miles. This endurance race includes an extremely steep path that forces many riders to climb off their bikes and push them upward in some sections, though some opt to carry their bikes over their shoulders, proving the true strength riders need to be capable of exhibiting.

According to the news release,

The race leads approximately 130 km over dirt tracks, sandy paths, rivers, mud pools, and fields. But the toughest part of the competition is not only the harsh area, it is the biggest enemy of a sportsman, which makes it a rough race: the high altitude of Ecuador’s Andes. The competition is held in altitudes between 3,000 and 4,200 meters [9,842 to 13,779 feet], which brings some extra roughness into the extraordinary and breath-taking cycling race.

The scenery offered through participating in this race is unlike most others because of the surrounding volcanoes and beautiful Ecuadorian Andes that are in view. In past years, teams from the U.S., Germany, Belgium, Spain, Israel, Venezuela, and Brazil, among others, have participated. Cyclists register in teams of two, and are then categorized into five groups based on gender or age—men, mixed, women, master, and super master.

The race is planned by CIKLA, which is an Ecuadorian MTB organization. The exact route of the race is unknown until about a week before the event.

Gulliver Expeditions is hosting multi-day training periods that are meant to prepare people for the extreme ride. There are three different options on the table for people who want to train for the race while getting acclimated to the specific climate, which are available in five-day, six-day, and eight-day training periods. These sessions include hiking, biking, and mountain climbing as means of adjustment.

“The best equipment, guides, and food will help you to reach the perfect condition for competing in the heights of the Ecuadorian Andes, and also to prevent you from suffering the negative effects of high altitude such as: altitude illness, HAPE (high altitude pulmonary edema), and HACE (high altitude cerebral enema),” the website stated.

“The itineraries are specifically designed for cyclists to gain expertise, to grow strength, and to prepare themselves for the altitude in the middle of the ‘Avenue of the Volcanoes.’ During five to eight days, the participants will explore the area, enjoy the amazing Andean landscapes, improve their endurance, and get mechanic and maintenance training.”

During this acclimation period, participants will be lodged at 3,200 meters, which the organization called “the perfect base for an activity in the Andes.”

For more information about the training sessions, contact Gulliver Expeditions.

Image from Gerard Prins on the Wikimedia Commons