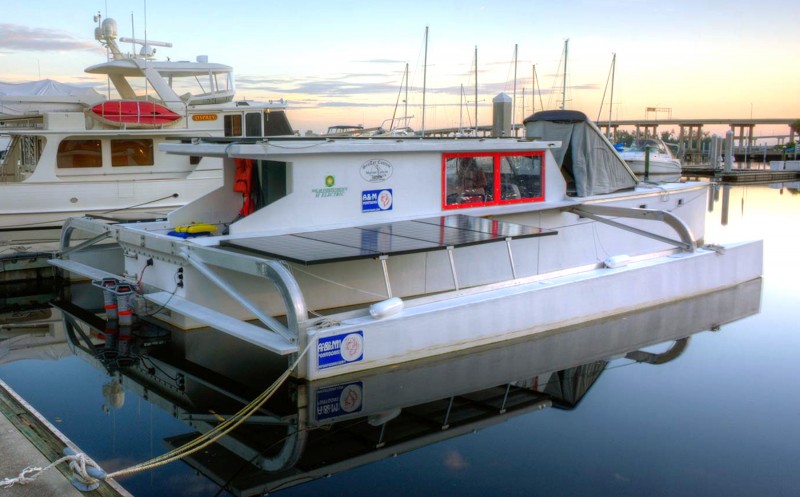 Skipper Jim Greer’s remarkable quest to complete the Great Loop, a circular navigation of the eastern half of the US, using only solar power, recently hit a milestone. The solar and electric powered craft has already made it more than halfway through its journey. As of mid-August, it has traversed the Oswego and Erie Canals and will soon navigate into Lake Ontario.

The over 6,600 mile journey, which Greer hopes will merit a place in the Guinness Book of World Records, relies on a dedicated four-person crew and two Torqeedo Cruise 4.0 electric outboard motors. This monumental undertaking commenced on January 11 from New Port Ritchie, Florida, where Greer and his crew began winding their way north along the Eastern seaboard. It also began with a common problem, he wanted to go for a boat ride, but didn’t have enough money for fuel.

Six years in the making, Greer’s visionary custom-built 45′ trimaran is equipped with a set of flexible solar panels and two banks of batteries dedicated to two state-of-the-art Torqeedo electric outboards. Named Ra, after the Egyptian god of the sun, the fossil fuel-free craft achieves an average speed of around 2-1/2 mph. Speeds up to 4 mph are possible with winds and currents in the boat’s favor.

“We had originally planned to be in Chicago by the end of the summer,” said Danny Johnson, the expedition’s first mate. Despite this, the Ra’s leisurely pace “isn’t a deal breaker,” he added. “We still expect to make it through the colder sections of our itinerary before cold weather sets in.”

As the Ra continues its slow but steady course, it will skirt states bordering Lakes Erie, Huron and Michigan before heading south along the great American rivers leading to the Gulf Coast Intercoastal Waterway. If successful, it will mark the first Great Loop performance achieved by solar power alone.

The same number of miles in a conventional power boat would require a fuel investment of over $10,000. Thanks to the Ra’s electric outboards, whose batteries charge solely with sunlight, Greer and his crew expect no fuel outlay for the duration of the trip.

With a thrust equivalent to a 9.9 hp gas outboard, each Cruise 4.0 R achieves an efficiency of more than 50%. “We’ve been really pleased with the performance of our Torqeedo engines. In fact, I’m amazed at just how robust they are,” said Johnson. Torqeedo motors are ideal for pontoons, sailboats and catamarans.

As the Ra chalks up a landmark 3,500 miles, Johnson retains enthusiasm for the adventures still to come in the second half of the solar boat’s tour. “It’s been a great experience so far.” Armchair travelers can follow the Ra’s progress at www.solarboatchronicles.com, as well as its Facebook and Twitter accounts.