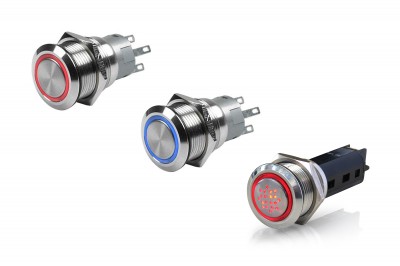 The evolution of LED technology has expanded its applications to ever smaller devices, even marine switches. Bumping up the cool factor while enhancing visibility and ease of use, Hella marine’s attractive new stainless steel LED switches are built to last.

A bright red or blue LED ring surrounds each Hella marine push button switch, which measures approximately 1″ across. Made from 304 stainless steel, the panel switches serve a variety of interior and exterior applications, such as controlling and dimming lights or operating accessories. They can also be installed into custom switch panels, or wired to signal circuit activation or indicate power to a system.

Like all Hella marine products, the IP67 rated switches are built to withstand the toughest conditions with quality features such as five pin terminals and silver alloy contacts. They proved their worth aboard the last generation of Volvo Ocean Race craft. Despite maximum exposure to the elements in the racing yachts’ steering pedestals, they performed admirably during the grueling year-long competition. The switches can operate in temperatures from -328º F to over 1,000º F.

Video of Hella marine’s advanced design, manufacturing and testing methods can be found at www.hellamarine.com or on YouTube.