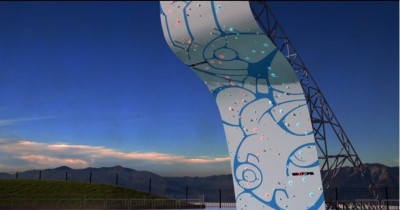 The inaugural Psicobloc Masters will be held August 2, 2013, at the Utah Olympic Park's.

The finals for the Psicobloc Masters Series will be held today at Outdoor Retailer’s Summer Market. The United States’ first ever deep-water soloing competition features some of the world’s best climbers competing in a head-to-head climbing duel. The four-day competition challenges each competitor to scale a 50-foot wall above Olympic Park’s aerial training pool without ropes or a harness. The fastest climbers in both men’s and women’s divisions advance to the next round. Today, these elite climbers will compete for a prize of $20,000.

“Psicobloc is an extreme and spectacular form of climbing that will undoubtedly blow everyone’s minds,” says Pro Climber and Event Organizer Chris Sharma. “For years we’ve talked about how this format will be the way of taking climbing to the mainstream. I’m really excited to be bringing this new and exciting form of climbing competition to the Olympic Park in Park City and am sure this will be an unforgettable experience for everyone who attends.”

Watch it live at 7 p.m. MT at http://psicocomp.com/watch.php