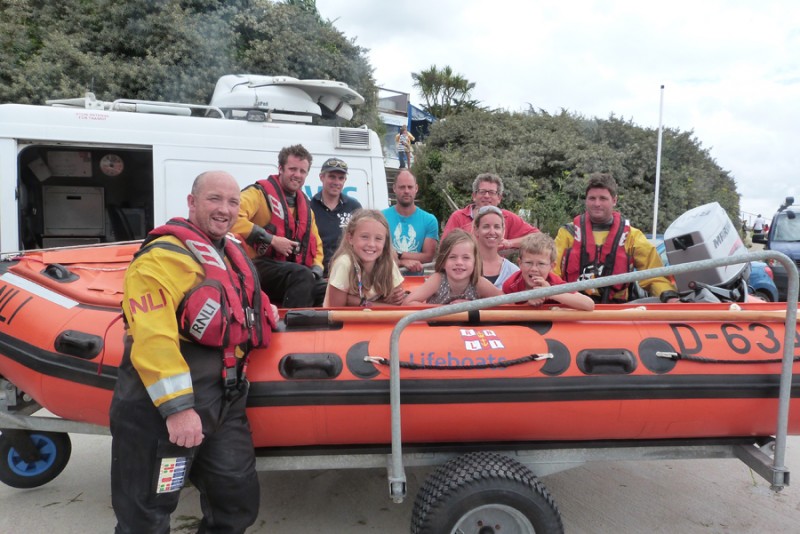 Four adults and three children are now celebrating a safe return after a message in the sand alerted rescue personnel. The British group took a sailing dinghy and a small inflatable boat to a cove near North Cornwall, England. It was supposed to be a relaxing vacation getaway, but quickly took a turn for the worse. Shortly after reaching the beach, the boaters found themselves trapped by a steep onshore swell. According to a press release from the Royal National Lifeboat Institution (RNLI), the adults decided not to risk launching the boats back into the water.

“I’ve visited the cove several times before and this was another idyllic sunny day so we headed out for a picnic,” said Tim Humfrey, one of the seven trapped in the cove. “We must have stayed on the beach for about an hour, exploring the cove but we did notice the tide was rising and the swell was increasing. We monitored the situation and even discussed what we might do if it didn’t ease.”

As the minutes passed he grew increasingly concerned with how they were going to leave.

“By the time we decided to get everything together to leave the swell and the waves were fairly serious, he said. “We had to take the decision that it was too dangerous to try and get out by boat with the children.”

The sound of the ocean would have drowned out any calls of help, and none of the stranded travelers could get cell phone reception. Eventually the boaters settled on digging a message into the beach in the hopes that someone walking along nearby cliffs would see it. The group used their hands to write “send for help” in large lettering on the sand.

“It was an anxious moment but once we had taken the decision to raise the alarm we were able to plan and get the children in to their lifejackets and on to higher rocks where we could all wait,” Humfrey said. “Fortunately someone noticed our message and called the emergency services and in around 15 minutes the coastguard team had arrived at the top of the cliff and signalled for us to wait for the lifeboat that was on its way.”

If no help came, the group would have attempted to weather the high tide while standing on rocks. Thankfully, a rescue crew from the Rock and Padstow RNLI came to pick them up. On Wednesday the stranded vacationers reunited with the RNLI team and presented them with a gift of beer and a sizable donation pledge.

“We owe a huge debt of gratitude to the RNLI and the coastguard for doing an amazing job, said Humfrey. “The lifeboat crew were utterly professional and considerate throughout; they were particularly marvelous with the children. I can’t thank them enough and we will be putting a worthy donation their way.”

The RNLI is a charity organization dedicated to life-guarding the coasts of Great Britain, Ireland, the Isle of Man and Channel Islands. It has been in operation since 1824.