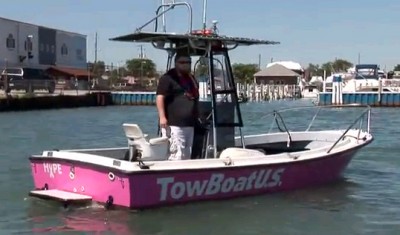 Towboat Hope, which is raising money this summer to fund breast cancer research.

When Captain Brian Williams of TowBoatUS Detroit, an on the water towing and assistance service for recreational boaters, wanted to do something for his mom, he picked up a can of pink paint.

The matriarch of the Williams family had been diagnosed with breast cancer in 2006, and after a brave battle, she passed away two years later. Brian decided to do something for his mom, painting his formerly red towboat pink, and changing her name to Hope, in an effort to create awareness of this deadly disease and to fund research. Capt. Williams is donating a portion of all the revenue the boat earns this boating season, as it patrols the Detroit River assisting boaters in need.

“I call it towing for a cure,” says Williams. “It’s our way to say we are here for those suffering from this monster. We want to help rid the world of cancer.”

Reactions have been positive. “No one has ever seen a pink towboat – this is the only one in the BoatUS nationwide fleet of over 600 towboats.” The disease also impacts Williams’ primary captain of the boat – whose mother also has breast cancer. “Breast cancer affects so many lives,” added Williams. On some days, Detroit area boaters will see one of William’s female captains at the helm of Hope. “I appreciate the significance of that. I’ve got a great crew of captains.”

To see a video of towboat Hope go to: youtube.com/watch?v=kYwqLo_c0mg

If you would like to make a donation to fund breast cancer research, go to: karmanos.org/MarineOne.