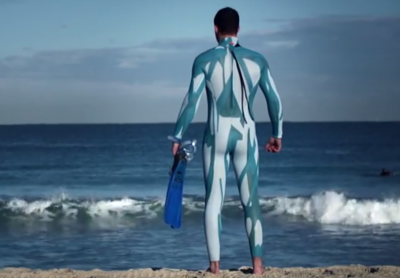 Using data gleaned from scientific studies, the designers of these wetsuits claim they can deter sharks.

Australian company Shark Attack Mitigation Systems (SAMS) announced the release of new shark deterrent technology in the shape of a wetsuit. The company claims that the designs on its new wetsuits will “disrupt a shark’s visual perception” so “an attack can either be diverted altogether or at least delayed to allow time to exit the water.” The project began after an increase in shark attacks off Australian shores, leading to five shark-related deaths last year. According to the BBC, Australia has an average of one shark-related death per year.

Working with researchers at the University of Western Australia (UWA), SAMS developed two design variations which resembled ocean-themed camouflage or mimicked the coloring of venomous snakes. SAMS’ technology has already been incorporated in products made by wetsuit company Radiator, but do these designs actually deter sharks?

Researcher Shaun Collin seems to think so. He and his colleges at UWA have been studying shark vision for years and he is considered one of the leading authorities in the field. Sharks see in black and white, a factor that the SAMS designs were quick to capitalize on. The blue Elude design mimics ocean environments to make the wearer less visible to sharks, while the zebra-striped Diverter is intended to warn sharks away.

“Many animals are repelled by a striped pattern which indicates the potential prey is unsafe to eat,” said Colin.

However, other experts are not sure if the suits can live up to their selling point.

“Sadly, a great number of the fatalities attributed to sharks occur in avoidable circumstances: swimmers entering the water where shark warnings have been given; surfing at dawn or dusk on reefs known to be frequented by sharks; and spear fishermen carrying their catch close to their bodies,” said Ali Hood, conservation director for the Shark Trust.

Impersonating a dangerous sea snake may also not be such a good idea.

“Well, apparently [the developers] hadn’t read the tiger shark literature,” shark expert Christopher Lowe told outdoors writer Pete Thomas. “Turns out the No. 1 prey item found in tiger shark stomachs from Australia were sea snakes! So, imagine what that tiger shark would be thinking as it rounded the reef and bumped into the giant, fat sea snake! Yum, yum!”

Video of the suits in action can be seen below: