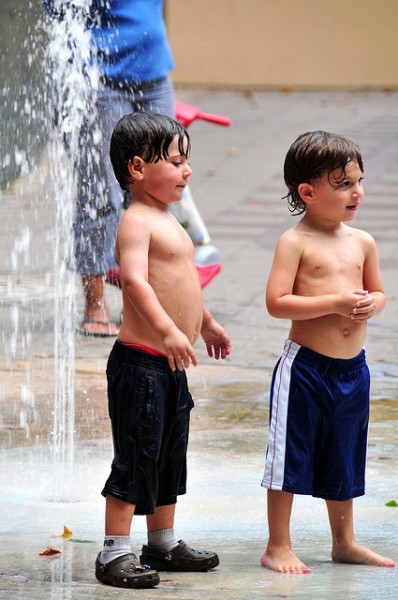 A sprinkler can be a fun way to keep cool as the nation's steamy heat wave continues.

Forecasters predicted temperatures of 90 or above in 47 states on Thursday as the nation heats up. Following a severe heat wave in the Southwest that threatened to beat records, residents in the Midwest and Northeast now get their turn at these blistering conditions. Compounded by high humidity, East Coast cities like New York and Philadelphia are burdened with an increase in power outages and emergency calls.

Overnight temperature records in Pennsylvania are being challenged every night and officials are advising residents to stock up on water. Shopping malls and other public places with air conditioning are seeing increased popularity as shoppers find excuses to linger before returning to the searing sun. In nearby New York City, power outages could mean dangerous nightly temperatures, especially for those who live alone. According to NBC, older brick buildings can retain heat long after the sun goes down. The city has already reported its first heat-related death and emergency crews are overburdened with a 20 percent increase in heat-related calls. People living in urban areas are more susceptible to prolonged heat waves due to the surrounding asphalt and concrete. This phenomenon is known as the “urban heat island effect.”

Relief is on the way in the form of cooler winds sweeping in from the north. Beginning on Thursday, forecasters expect a cold front to move down from Canada and to begin hitting the high pressure dome in the Midwest that is the cause of the high temperatures. Unfortunately, forecasters also predict severe storms to be in the works throughout the weekend. Minnesota, Michigan, and Wisconsin will be among the first states to be hit before the front travels east to New England.

Image from Ed Yourdon on the flickr Creative Commons