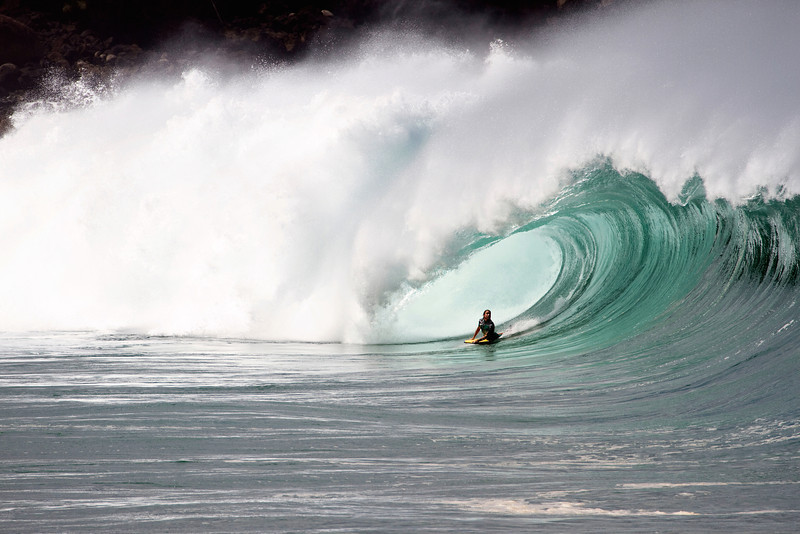 David "Dubb" Hubbard, one of the creators of Hubboards, on a wave at Waimea Shorebreak in Oahu.

Long-time bodyboarders Jeff and Dave Hubbard have taken their passion for the sport to the production line, generating their own brand of boards that have recently hit the market. Growing up in Kauai, Hawaii, the brothers got an early start in bodyboarding, bringing home numerous wins in a variety of competitions. Jeff is a three-time International Bodyboarding Association World Champion and a four-time IBA Pipeline Champion, and Dave is the Dropknee World Champion, among holding other titles.

“We had just parted ways with our long-term sponsors and it felt like perfect timing to branch out on our own,” Jeff told BBR Magazine. “It is what needs to happen for the industry to continue to survive and grow. Bodyboarders have to take control of our own companies in order to control the sport’s destiny and to be able to reinvest money back to its core roots.”

After beginning work on their products in early January, Hubboards were officially unveiled at the Orlando Surf Expo.

“We created Hubboards because we are both so passionate about the sport of bodyboarding. After being team riders for so long we now want to become more involved in all aspects of the sport and through research and development and product design, our brand evolution can help us bring more to the future of bodyboarding,” the brothers stated on their website. “Now we are able to produce products we have total control of and believe in 100 percent. We get to work with our friends and still travel around the world riding waves. The worldwide bodyboarding community has been so supportive and excited for us that it is a really humbling experience for us at Hubboards and this pushes us even harder everyday.”

The boards are “manufactured using the highest possible grade materials and craftsmanship available in the world, in Indonesia.”

Concerning the Hubb Edition, Dave said, “There is no substitution for a good board–one that responds to your prompts as well as to the waves. With the right board, you can drop in, trim, and approach the wave as you see fit. I ride my Dubb Edition Hubboard because it allows me to access the ocean’s power. It’s impossible to ‘master the sea,’ but to become in sync with it, just for a moment, is priceless.”

When explaining the Dubb Edition, Dave said his highest priority is functionality when he’s creating a craft.

“The result from designing this Dubb Edition is a versatile, fully-functioning, wave-riding vehicle,” he said. “Basically the board’s main functions are generating speed and controlling it.”

They both said they feel this brand will allow them the best vehicle to give back to the sport they love.

To learn more about Jeff, Dave, and the Hubboards, check out their website.

Image from Evan Fa on the Wikimedia Commons