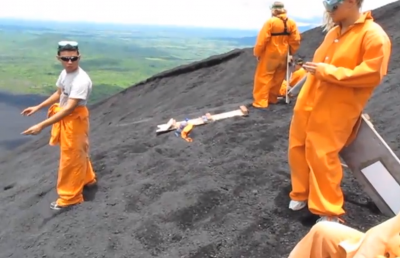 Cerro Negro is the most active cinder cone volcano in the world. It's also a great place for volcano boarding.

Clad in bright orange jumpsuits, these dusty adventurers might be mistaken for escaped convicts or fashion-blind geologists. In reality, they are fans of an up-and-coming sport commonly known as “volcano boarding.” Using thick plywood boards with metal underlining, sometimes of their own construction, these daredevils are willing to hike the hours-long climb up a volcano for a short but exhilarating ride. Volcano boarders tend to favor smaller volcanoes with gentle slopes, and preferably active.

“We hiked about an hour to the lip of the crater,” volcano boarder Joshua Berman told Fox News, recalling a time when he scaled Cerro Negro in Nicaragua. “Visibility was miles and miles–from the crater lip I could look north up the Maribio Volcano chain, an active, seething section of the Ring of Fire.”

Berman was among the first wave of adventurers who started to popularize the sport, back in 2004. Many credit Nicaragua’s Bigfoot Hostel for defining volcano boarding. The hostel is situated near Cerro Negro and offers frequent expeditions to the volcano, boards included. Guests are clad in orange jumpsuits for easy visibility and can either slide down the mountain using the board as a sled or sometimes a snowboard variant. Unlike snowboarders however, the heavy grit of rocks and ash make the ride a rather bumpy experience–and slower than expected.

“The boards bogged down in the sand and ash, but the wind blowing the dust behind us gave the illusion of great speed in the photos,” Berman said.

Still, high speeds of up to 57 mph were recorded. Visitors say one of the high points of the experience is the hike up to the crater lip, which appeals to backpackers who would not have otherwise heard of the sport. They are not the only ones interested, adventure traveling companies are also taking note and booking trips. Cerro Negro is now a popular destination for volcano boarders, in spite–or because–of the fact that it is the most active cinder cone volcano in the world. Cerro Negro has had 23 eruptions in the past 150 years with its most recent being 1999.

A video of volcano boarding can be seen below:

Image screenshot of video by Holly Beck Obermeyer on YouTube