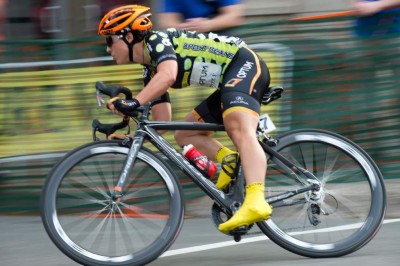 Yakima’s own Brianna Walle is fulfilling a dream at the end of this month. The rookie pro cyclist, who only began racing in 2010, is heading to Italy to join the United States National Women’s Cycling Team. She and her teammates will compete in the Giro Rosa, the sister race of the renowned Giro D’Italia.

Considered to be the world’s most challenging stage race for women, the Giro Rosa is taking place from June 30 through July 7, 2013.

Brianna is a member of the Minneapolis-based team, OPTUM Pro Cycling presented by Kelly Benefit Strategies. She joined the team, which is currently ranked 14th out of 32 UCI international teams, in December 2012.

When not training and racing, Brianna works at Yakima as a global customer service representative, a position she has held for almost five years.

“I am incredibly fortunate to work at Yakima. They are very supportive of my racing, and always accommodating of my schedule,” said Brianna. ”It’s a struggle to find enough sponsors to support women’s cycling in general, so many women have to maintain a second job on the side. I have friends who have had to retire from their professions because their employer wasn’t understanding of their special scheduling needs. I am lucky to work somewhere that totally gets it and is cheering me on all the way. It’s all paying off now as I join the US National Cycling Team.”

“The entire Yakima customer service team is extremely proud of what Brie has accomplished. Her success in racing comes from the same passion that she gives toward providing great customer service,” said David Dezellem, Yakima Customer Service Manager. “Whenever Brie is racing, the Yakima team follows the results and celebrates her victories.  We’re all wishing her our best as she tackles the Giro.”

Brie credits Yakima with inspiring her to race in the first place.

“Dave and my coworkers could sense that I had a competitive nature about me, especially since I come from a racing background in other sports, including running and skiing,” noted Brie.

Encouraged by her co-workers, she jumped into bike racing with both feet and quickly began tearing up the circuit. Racing for local team Ironclad Cycling, she quickly worked her way to Category 1 level.

In Fall 2012, she placed first overall as Best Amateur Cyclist at the Nature Valley Grand Prix as part of the Nature Valley Pro Chase Composite Team. That caught the attention of Rachel Heal, team manager of OPTUM Pro Cycling, who invited her to join the team.

Brie’s ultimate goal: the 2016 Olympics in Rio de Janeiro. Yakima will be following Brie as she embarks on her first international pro cycling competition via her Twitter account, @briewalle.