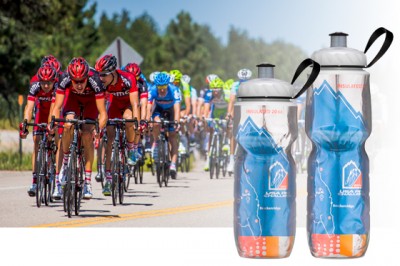 The new bottle design, which maps the race from the start in Aspen, CO to finish in Denver, was finalized earlier this year after race organizers officially announced the 7-stage race route.

“We were all so eager to know the route so we could get the 2013 bottle finalized,” said Polar Bottle President Judy Amabile. “It was really fun to work with race organizers and watch the design come together. The bottle turned out great.”

Polar Bottle became the official bottle of the USA Pro Cycling Challenge last year — signing a 2-year sponsorship contract with race organizers. The 2013 Commemorative Bottle, which is now for sale on the Polar Bottle website and will soon be sold at stores around the country, is one of six designs included in the USA Pro Cycling Challenge bottle line.

The patented Polar Bottle water bottle features an insulating layer between two walls of plastic, so it keeps liquids cool twice as long as other water bottles. The Made in America bottle fits standard bike water bottle cages and features a convenient, removable carrying strap. Like all Polar Bottle products, the USA Pro Cycling Challenge bottles are BPA-free and Phthalate-free.