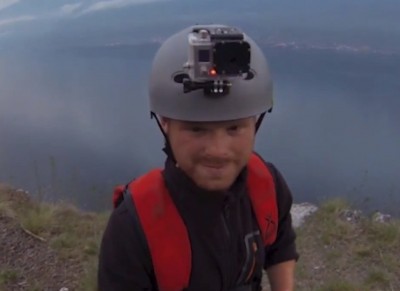 Matthew Gough smiles for his friends shortly before the jump.

Matthew Gough, 25, has been BASE jumping for over three years, racking up an impressive 180 flawless attempts. This ended when a routine jump last month in Lake Garda, Italy could have been his last. During the fall, Gough’s parachute deployed incorrectly and he wound up falling almost 1,000 feet to the ground, scraping against jagged cliff rocks until he landed just inches away from a metal spike.

According to Huffington Post UK, Gough managed to survive the fall with only minor injuries. After a short hospital stay, he miraculously returned home with no permanent damage.

“When I hit the floor I was so shocked I was alive, I was thinking, I have seen this stuff on videos but now it is happening to me,” Gough said. “I was in total shock that I was alive, that was when the pain set in.”

Gough knew something was horribly wrong when he pulled his parachute and it began to twist. Falling to Earth at 40 mph left little control over his descent but Gough tried to steer himself away from the cliff face. His first impact against the rocks was made with his knees, and jarred him badly enough to believe that his legs were broken.

“I was trying to think about what to do, but all I could think about was trying to stay alive,” he recalled. “I knew the final impact was coming soon and I knew if I hit the floor at the speed I was travelling, I was in a whole lot of trouble.”

Gough tried to avoid going into the nearby lake because he thought his legs were disabled, so he aimed towards what he hoped to be a soft spot. Instead, he landed on cement next to a row of spikes that took off his helmet. Incredibly, Gough suffered only knee and ankle injuries.

You can see video taken from his helmet-mounted camera below:

Despite the fall, Gough still plans on future jumps.

“I am still going to BASE jump but it has made me more aware of the risks,” he said. “I wouldn’t want this happening to me again and wouldn’t wish it on anyone else.”

This is, of course, despite his parents’ pleas.