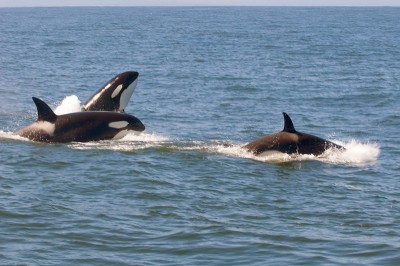 In the waters off South Africa, Rainer Shimpf came across a group of orcas while working as a diving guide. As the pod traveled, Shimpf noticed that one of the young orcas had trouble keeping up with its family. Upon closer inspection he found that the animal seemed to lack both a dorsal and right-side pectoral fin, which made it difficult to swim at the high speeds needed to ambush prey. According to the Daily Mail, Shimpf began following the pod when he noticed other members of the group picked up the slack to care for the disabled orca. Highly intelligent animals, killer whales have complex societies comparable to those of elephants and primates. Especially rare among the animal kingdom is the fact that orcas maintain lifelong relationships, frequently between mothers and their young. Killer whales are a long-lived species and it is possible for multi-generational families to travel together. Behind the ferocity of the killer whales is a compassionate nature, especially for one of their own.

“It shows these mammals are not really just ruthless killing machines but they also have complex, caring social-structures in which they care for their own disabled members,” Schimpf said.

The guide joined the orcas on a memorable hunt as they pursued a Bryde’s whale, a creature much larger than themselves and capable of weighing over 15 tons. Orcas can consume large amounts of meat every day and are considered by scientists to not be unlike terrestrial wolves in their hunting habits, earning them the nickname “wolves of the sea.”

While the rest of the pod speed forward to join the chase, the disabled orca stayed behind and inspected Schimpf’s boat. Hunting larger prey can take a significant amount of time and determination on the pod’s part. Killer whales practice a form of underwater persistence hunting that could take several hours, or end whenever its prey tires. After satiating his curiosity, the disabled animal dived towards deeper waters to rejoin his family for dinner.  Although killer whales usually only eat select parts of other whales, Shimpf says the kill should be able to sustain the entire pod.

Killer whales have been known to support disabled or ill members within a pod. Orphaned animals have also been occasionally reintroduced back into orca groups and form natural relationships even after years of captivity.

Image from Erik Ogan on the flickr Creative Commons