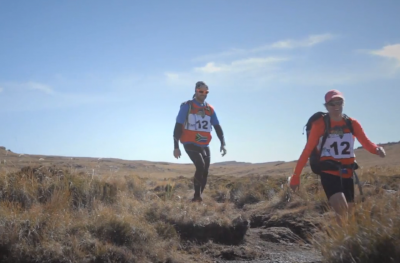 No marked trails for these contestants under the African sun.

Thirty-one teams started out on the adventure racing competition known as Expedition Africa, combining biking, kayaking, swimming, climbing, and hiking into a 340-mile journey across the Drakensberg Mountains in South Africa. Only one team however, can claim first prize. The winners will get the chance to participate in the Adventure Racing World Series hosted in Costa Rica later this year, along with a sizable cash reward.

Teams had the rare benefit of setting their own pace on the grueling journey. In addition to switching between different modes of travel, participants looked forward to day and night travel at breakneck pace to reach every checkpoint. The race started with a 47-mile trek on Drakensberg at an altitude of nearly 10,000 feet and did not let down from there. Once the race started every team was on their own, with a pack full of equipment and relying on their own sense of navigation. Mountain biking took up the majority of the race with nearly 50 percent of the course, with hiking, kayaking and climbing accounting for the remainder. Participants pushed themselves on each leg of the race in a variety of disciplines, until Swedish adventure racing team Haglofs Silva cinched first place after nearly 100 hours of competition.

“We managed to keep a surprisingly high speed on the last 10 kilometers and reached the finish line with cameras flashing on us, relieved that it all was over,” The team wrote on their blog.  “Still, we had no idea about the outcome of the race and when we were told that we were first, all smiled and a few tears of relief were shed. What a fantastic finish after an almost epic race for us.”

Highlights from the 2013 race can be seen below:

Image screenshot of video by Steven Freitag on YouTube