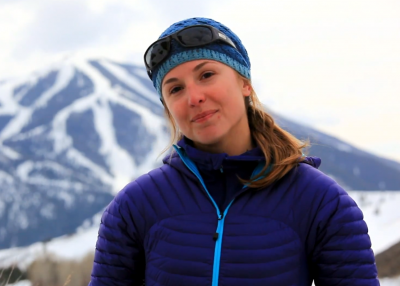 Climbers credit American mountaineer Melissa Arnot for her role in protecting three of her colleagues during a violent confrontation on Everest last week. Along with several others, Arnot helped to diffuse a tense situation that involved beatings, thrown rocks, and reportedly a stabbing. The incident occurred April 27 following an argument between three climbers (Simone Moro of Italy, Ueli Steck of Switzerland, and Jonathon Griffith of Britain) and a group of Sherpas.

The three were all experienced climbers, with Steck notably scaling Everest on a previous expedition without the aid of supplemental oxygen. They were involved in altercation with a Sherpa team after the three moved over the Sherpas’ climbing lines. The Sherpas claim that the movement was threatened their safety and caused a portion of ice to break off and injure one of the team members. A heated argument broke out on the ice face and both teams decided to descend to Camp 2 to resolve the issue. When Steck’s team arrived they were confronted by a large crowd of Sherpas. Different accounts from a number of climbers branch off at this point, each offering a different perspective of the confrontation.

Moro, Steck, and Griffith say that the roughly 100 Sherpas were immediately hostile and began demanding apologies from the international team. Events took a turn for the worse when demands turned into death threats and the crowd began beating the climbers and striking them with rocks. Reportedly one man attempted to stab Moro but thick clothing stopped the knife. Several other climbers and some Sherpas at Camp 2 attempted to diffuse the situation. Steck said that one climber, Arnot, saved their lives. Arnot is an elite mountaineer and the women’s record holder for the highest number of Everest summits. She knew many of the foreign climbers and Sherpas present and her influence helped to keep the fight from turning lethal.

“I wasn’t trying to be heroic,” she told ABC News. “But I do think my presence prevented some violence.”

Arnot put herself physically between Steck’s team and the furious Sherpa crowd.

“I felt like it was much less likely that they would hit me actually or hit me with a rock just being a woman,” she said. Her actions sheltered the climbers from the brunt of the assault, and later the international team was given an ultimatum: leave the mountain in one hour or die. Steck’s team quickly left for Base Camp.

Other accounts paint a different picture. Garret Madison, expedition leader for Alpine Ascents, claims that Moro challenged the Sherpas to a confrontation at Camp 2. Madison wrote in an email that following Moro’s argument with the Sherpas on the ice face, the Italian climber stated over an open radio frequency that he wanted to fight. Upon reaching Camp 2 Moro was approached by several foreign climbers who advised he should apologize, and during the discussion a crowd of Sherpas from different teams gathered. The already tense situation flared when a climber, not one of Steck’s team, confronted a Sherpa. A brawl then ensued.

On Monday Moro, Steck, and Griffith met with the Sherpas in Base Camp and reconciled, with both sides admitting fault. A contract was signed to prevent future violence on the mountain. Steck and Griffith have decided to cancel the expedition while it is unknown whether Moro will stay on the mountain. Nepalese authorities are currently investigating the fight.

Image screenshot of video by Whittaker Mountaineering on YouTube