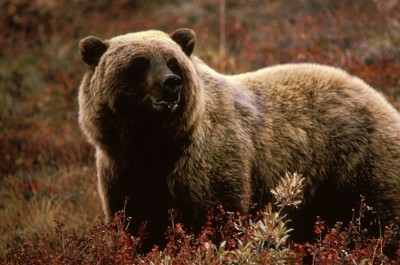 Toby Burke, 48, has seen his fair share of bears as a biologist for the Kenai National Wildlife Refuge, but never before has he seen them so close. According to ABC News, Burke was on a hike with his wife Laura and their three young children along the Alaskan Kasilof River Beach when a bear run-in occurred. The family was enjoying a day outdoors and bird watching when they sighted a brown bear walking along the dunes. Burke stopped his family and told his wife that they should stay above the bear.

Eventually the bear disappeared and Burke assumed it had gone away to feed, but minutes later he was confronted with the brown charging towards his family.

“The bear is coming, it’s coming towards us!” screamed his 11-year-old daughter Grace. The family began waving their arms in an attempt to cow the bear into fleeing, but the tactic did not work and the bear closed the distance between them. Laura Burke took the hands of her children and sheltered behind her husband as Toby Burke tried to lure the bear’s attention to himself. He scanned the area for anything to defend himself and sighted his bird watching scope on a metal tripod.

“I put the scope sideways into the bear’s mouth, keeping it away, and it swatted at the scope and severed it,” Burke said.

The broken tripod was left with a sharp tip, which Burke struck against the bear’s face. However, it takes more than that to dissuade the bear and it ripped the tripod away from the biologist.

“It was just me between my family and the bear,” he told ABC News. “At that point, I made physical contact. All I could do was put my left arm up. Then its mouth clamped down on my forearm. So I remember hitting it in the face with my right arm.”

The bear chomped down on Burke’s arm with crushing force, but thankfully he had layered up heavily for the low temperatures and walked away with only a painful bruise. The man and animal had a quick, frenzied fight and eventually the bear was forced to retreat.  Burke suffered minor injuries from the incident and later notified Alaska State Troopers and wildlife officials.

When troopers arrived on the site they found an erratic female brown clawing at a telephone poll and attacking other bears. When the bear turned its attention on state troopers it was shot and killed. The Alaska Dispatch reports that the female had worn-down teeth, which accounted for Burke’s good fortune during the fight. Officials suspect the bear to be around 10 years of age.

Save for a few minor cuts and bruises, Burke emerged from the attack unscathed. Nobody else was hurt.

Image from Bobisbob on the Wikimedia Commons