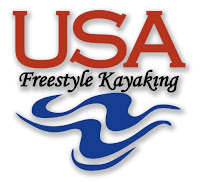 This past weekend the 2013 USA Freestyle Kayak Team was named in Bryson City, NC, during the NOC’s Freestyle Shootout & 2013 USA Canoe/Kayak Freestyle Team Trials. Kokatat is proud to equip each athlete on the team with its GORE-TEX Full Zip Jacket and Paddling Trunks as part of the team’s official uniform.

“These athletes represent our nation’s best and we’re excited that they’ll be wearing our gear while representing our great country at the World Championships and other competitions throughout the year,” said Jeff Turner, Kokatat Sales and Design Manager.

“Kokatat has been a backbone for paddlesports in the US, and we’re thrilled that they will be outfitting our athletes,” Risa Shimoda, chair of USA Freestyle Kayaking, who qualified for the USA Freestyle Kayak Team for the eighth time.

Following team trials, National Team members will compete in various competitions around the country and world before returning to Bryson City and the Nantahala Outdoor Center in September when the retailer and kayak instruction center hosts the International Canoe Federation’s (ICF) Canoe Freestyle World Championships.