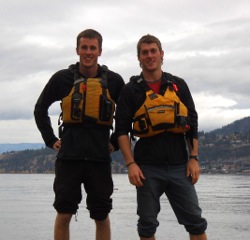 In a show of dedication to the world’s most exciting paddle-powered endeavors, Kokatat is proud to announce a new partnership with expeditionary kayakers Russell and Graham Henry as they attempt to paddle 6,500 kilometers north from the mouth of the Amazon River to Florida.

The Henry expedition started as a classroom daydream that would soon materialize into a reality. “Sometime near Easter, we asked each other the same question,” Russell recalls. “’How serious are we about this thing?’” The answer, simply, was “very”.

The team’s proposed route will meander 2,500 kilometers up the coastline from Belem, Brazil to Trinidad and Tobago, before eventually navigating past 18 island nations throughout the Caribbean. The team will depart in June and hopes to make landfall on Juno Beach, Florida by next January.

The trip will mark the longest ever by paddlers under the age of 25, and will trace a route that has only been partially completed in the past.  In 1978, legendary expedition kayaker John Dowd spent seven months paddling the segment the Henry’s are planning through the Caribbean. The brothers aim to complete the entire trip in seven months.

Raised in Victoria, B.C., Russell (21), and Graham (22), have been passionate about the outdoors since a young age. When the brothers aren’t kayaking, they spend their time sharing a unique passion for wilderness tripping with youth organizations. The two hope that their trip will inspire kids to live more environmentally conscious and active lives.

As the team traces a line north across the equator, conditions are bound to change. Subject to volatile seas and isolated stretches of shoreline, the Henry brothers can anticipate weather playing heavily into their plans.

To endure the most brutal coastal conditions, the brothers have chosen Kokatat’s Gore-Tex Anorak and Maximus Prime PFD to keep them dry and safe.  In order to stay hydrated while paddling, the team will use Kokatat’s Tributary Hydration System, a 1.5 liter reversible reservoir that attaches to the back of the Kokatat PFD.

For more information on the Henry brothers and their upcoming landmark voyage, visit www.henrykayak.com, and be sure to visit www.kokatat.com for details on the team’s entire kit of Kokatat paddling products.