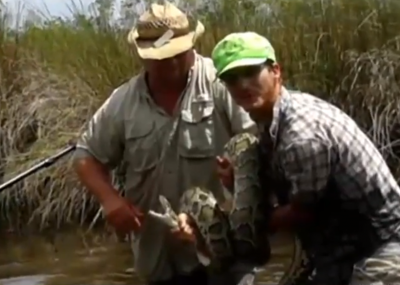 One family on vacation got an unexpected show during their canoe tour when their guide jumped into the water after a 10-foot long Burmese python. Tommy Owen, an employee of Everglades Adventure Tours, told WBBH that his reason for going after the snake was simply instinct. The Burmese pythons are a highly invasive species that have caused Florida wildlife officials–and native species–no small headache. In addition to being hard to find and capture, the pythons have voracious appetites.

“They don’t belong here and that was literally running through my head,” Owen said. “I just launched on it essentially, ambushed it like any other predator out here and just got it–had the best grip on it and never let go the entire tussle.”

The lifelong Florida resident knows a thing or two about pythons, but Owen underestimated exactly how big the snake was.

“I didn’t even realize it was 10 feet–definitely thought it was over six feet–definitely bigger than me. I didn’t realize it was three times the size of my arm,” he said. It meant a rude shock when the python coiled itself around his arm. Owen wrestled calmly with the snake until his partner was able to kill it.

“With a snake especially that big, you get one chance to grab it by the neck where it doesn’t bite you. I had him, eventually exposed the neck to Warren. I want the head away–that’s the most dangerous part of the snake so I exposed the neck and he was able to eventually make that cut,” Owen explained to WBBH.

Florida recently held a python hunting competition aimed to promote awareness of the problems these snakes cause. Biologists are hoping that data generated from the hunt can help the state draft comprehensive plans on preventing the pythons from spreading. The species’ native environment in Southern Asia resembles the Everglades, but there are very few natural safeguards to check the snakes in the Florida wetlands. It is suspected that the first pythons were introduced to the wild by careless pet owners.

Embedded below is a video of the incident.