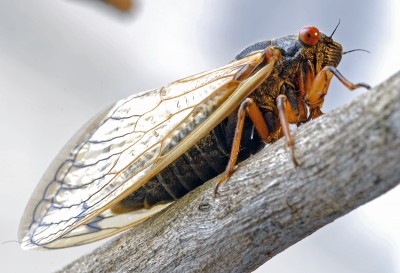 If you live on the East Coast, odds are that you’ll being seeing a lot of cicadas this spring. Also called locusts, cicadas spend most of their lives underground in a nymph stage. They only emerge every 13 or 17 years as an adult in a brief but frenzied mating season. A millions-strong group of cicadas, creatively named Brood 2, is set to emerge from North Carolina to as far as Connecticut. According to National Geographic News, these cicadas are the offspring of a population last seen in 1996.

While being relatively harmless critters, cicadas are know to mistake humans for branches containing tree sap, their food of preference. Cicadas can be harmful to crops, although not to extent of “true” locusts, and may damage some species of trees. The biggest concern is simply that cicadas can become a nuisance with their loud mating chirps.

After their all-too-short time in the sun, the brood will expire and leave behind countless bodies. Scientists expect the brood to appear in May or later.