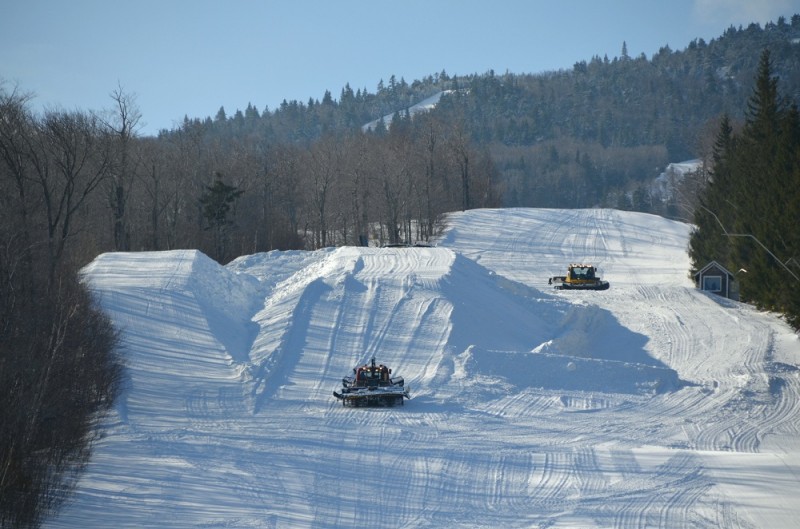 Groomers take to the snow for the Vermont Open at Stratton.

What will fill the hole left by the legendary Burton U.S. Open leaving its Vermont birthplace for Vail?

It may be snowboard boots too big to fill but a handful of events on both sides of the Connecticut River in Vermont and New Hampshire will have riders getting big air, riding rails, and scaling pipe walls during a time when the Open ruled the Green Mountain State.

The debut Vermont Open is at Stratton in southern Vermont, March 15-17, the U.S. Open’s former stomping grounds where legends like Shaun White, Kelly Clark, and others continued to shine among legions of up-and-coming riders.

Billed as a snowboard competition and music festival, the three-day event will have competitive contests for snowboarders of all ages and resumes.

Spearheading the effort is Londonderry, Vermont snowboarding pioneer Steve Hayes, an early U.S. Open competitor in the 1980s noted for being on Burton Snowboards first sponsored team. His pro career lasted until a 1995 injury forced him out.

Hayes acknowledges he’s “washed up.” He and some buddies started a banked slalom race called the Washed Up Cup. When the U.S. Open left for Colorado, Stratton asked him to expand the Cup. That developed into the festival with a rail jam, 100-foot long halfpipe with 12-foot walls, Snurfer Challenge, big air, quarter pipe, and that banked slalom.

He is now behind the new Vermont Open with a $20,000 prize purse and envisions a “truly open event.”

Says Hayes, “We’ve created this event so that a young kid from Londonderry can compete on the same stage as a well-known pro or a legend.” Loon Mountain’s Last Call has been at the Lincoln, New Hampshire resort for 10 years.

Pro and amateur riders compete in big air, rails, and a mystery session on some huge features.

“Everything’s probably a little bigger than it usually is, a little more chiseled and defined than it would be for the regular public park,” said Jay Scambio, terrain park development manager for Boyne Resorts.

Five thousand dollars in prize money and gear is up for grabs in the March 18 event.

“If you look at the U.S. Open or the X Games, it’s very formatted, and very structured, and there’s a lot of money behind it,” Scambio says, “Whereas at Last Call there’s been this pretty high level of rider but we’ve maintained a grassroots vibe.”

There were some impressive judges with Winter X Games silver medalist Jason Evans and 1998 Olympian Ron Chiodi, and about five grand in prize money.

“Everything about this competition was world-class. The mega plaza our park crew constructed was like nothing I’ve seen before, the judges are some of the most well-respected names in the snowboard community and every competitor threw down which got the crowd hyped,” said Mount Snow event manager Tim Dolan. “We’ve set the bar pretty high in just the first year of the event. I can’t wait for next year.”

The entire competition was jam format and started out with preliminary heats before the field was whittled down to the top few from each category which set up for an exciting final in the afternoon with competitors using the entire course to pull tricks that riled up the crowd.