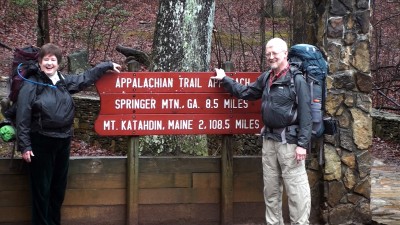 Hikers awaiting the end of mud season and anyone who enjoys an armchair adventure will enjoy “Road Less Traveled,” a new documentary about thru-hikers on the Appalachian Trail. The independent film by Jason Pavelko and Jeff Dougherty will have its broadcast premiere Thursday, April 4, at 8 p.m. on Vermont Public Television.

“Road Less Traveled” follows eight people who set out in 2009 to make an end-to-end uninterrupted journey along the entire Appalachian Trail within the year.

Co-producer Jason Pavelko has worked in television in the New York City and Washington, D.C., areas for 16 years. He has been a producer, writer, editor, graphic designer and videographer. He was once asked to come up with a new show idea for a local sports network and pitched the idea of following a group of hikers who wanted to hike the entire Appalachian Trail within one year. The idea was rejected as “too difficult to produce.” Pavelko raised the money himself and founded the company Road Less Traveled Productions to make his idea a reality. He asked former co-worker Jeff Dougherty to act as co-producer.

Of “Road Less Traveled,” he said, “This is an inspirational and entertaining show that will make you want to dust off your hiking poles and hit the mountain trails.”

Co-producer Jeff Dougherty has worked in television for more than 10 years. He has had a variety of jobs, starting as a news photographer in Hartford, then editing and design jobs in Washington, D.C., and Philadelphia, Pa. When he heard Pavelko was making a documentary about the Appalachian Trail, he jumped at the chance to be a part of it. The work combined his love of film-making and hiking.