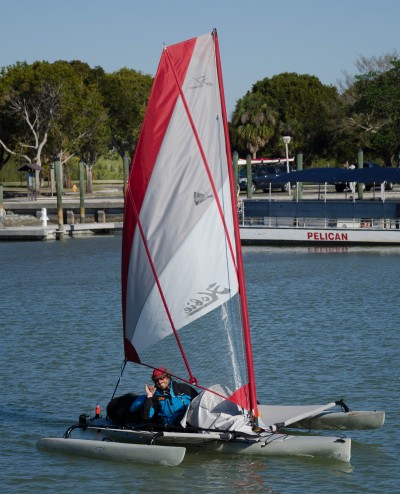 Jim heading out for last leg

At exactly 7:00 Saturday morning, March 2, off the coast of Tampa Bay, Florida, 88 participants crossed the starting line of the Everglades Challenge. The event – a 300+-mile unsupported, expedition style adventure race for kayaks, canoes, and small boats –can most accurately be described as grueling. Five days, nine hours, 26 minutes, 330 miles and 62 participants later, Jim Czarnowski, Hobie’s director of engineering, crossed the finish line in Key Largo. His boat was the Hobie Mirage Adventure Island. His result was first place in his class and, perhaps even more impressive, he posted the fastest overall time of any competitor in the most difficult route, the famed Everglades National Park Wilderness Waterway. Jim was also on the first Hobie to ever make the remote and challenging passage. Many thought the water would be too shallow and too narrow for an outrigger-equipped Hobie powered with their patented MirageDrive pedal system. Jim proved them wrong.

As one of the most versatile watercraft on the market in all kinds of conditions, the Adventure Island lived up to its reputation as the ultimate boat for this sort of event. The sail enables the boat to fly in wider bodies of water between islands. The akas and amas can be folded inward making it narrow when maneuvering mangrove swamps. Hobie’s iconic MirageDrive pedal system can go flush against the bottom of the boat in grassy, muddy shallows.

“Being on the boat for that long without any human contact was frightening and lonely at times but totally exhilarating,” commented Jim, AKA Penguinman. “For two days of the trip, I didn’t see a single person. The open ocean section was definitely challenging, but my boat held steady as I furled my sail in 30+ knots of wind and five- to six foot seas. Hitting eight to 10 knots for extended periods of time on a 16-foot open cockpit boat is nothing short of awesome!”

The Challenge is one of several events run by the Watertribe Organization. Their mantra is to encourage the development of boats, equipment, skills and human athletic performance for safe and efficient coastal cruising using minimal impact human and wind powered watercraft such as sea kayaks, canoes and small sailboats.

The event draws from hobbyists and professionals alike. It runs the gamut of a fun vacation week for some to a serious product testing session for others. In fact, the concept of Hobie’s Mirage Tandem Island was born in one of the earlier challenges. Jim competed with his wife, Elena, in a prototype, returned home and subsequently made a series of improvements that resulted in one of Hobie’s biggest success stories. The company has sold so many, in fact, that they actually have launched the Hobie® Island Club to get owners together to join in outings like the Everglade Challenge…and many others that are a lot less challenging.

Competing “unsupported” means that there are no safety boats or support crews to help competitors during the race. Support crews cannot follow, give routing information, help with repairs or provide any kind of advice during the race. “Expedition style” means that participants must be self-sufficient and carry the same type of equipment and supplies that would be part of a four week or longer expedition including camping equipment, food, water, safety and communication devices.

“I ended the week on a total high, both personally and professionally. It was just great to confirm all the work that our team has done in creating the Islands,” ended Jim. “And after the race, I was hoping to bask in the glory just a bit, but all anyone kept asking me was why my fun-loving wife, Elena, AKA “Ocean Diva,” wasn’t there and if she is coming next year!”

Since 1950, Hobie has been in the business of shaping a unique lifestyle based around fun, water, and quality products. From their headquarters in Oceanside, California, Hobie Cat Company manufactures, distributes, and markets an impressive collection of eco-sensitive watercraft worldwide. These include an ever-expanding line of recreation and racing sailboats, pedal-driven and paddle sit-on-top recreation and fishing kayaks, inflatable kayaks, fishing boats, plus a complementary array of parts and accessories.