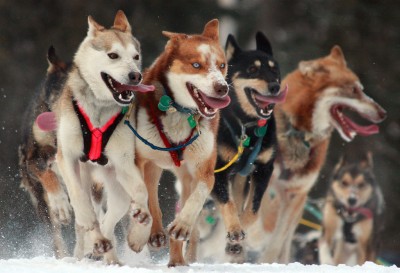 It’s no secret that sled dog racing isn’t as lucrative as say, NASCAR. That’s no problem because many mushers, including racing couple Aily Zirkle and Allen Moore, aren’t big on gold bidets and lobster dinners. Moose steak on the other hand, is a welcome treat. According to USA Today, The married couple share a team of sled dogs and a love of hunting, which is a common trend among the Iditarod’s many participants. Hunting for food helps offset the costs of training, breeding and keeping large kennels of sled dogs.

The Iditarod is perhaps the world’s best known sled dog race, styled by organizers as the “last great race on earth.” The 1000-mile journey has been known to run into negative 100 Fahrenheit temperatures, blinding blizzards, and remains a test of endurance to both man and animal. The grand prize for braving these hardships and coming in first place is a relatively meager $50,400 -and a pretty neat Dodge Ram pickup. The rewards don’t come close to covering the expenses incurred for feeding the dogs and equipment, and that’s if you win. For most the Iditarod stalwarts, they’re here for the love of the race.

Zirkle and Moore, who started competing in this year’s Iditarod when the race kicked off over the weekend, say they regularly hunt moose to keep meat in their diets. It’s not because they’re without means, the couple is supported by a number of sponsors during the racing season. The mushers just prefer this lifestyle. Zirkle and Moore live in Two Rivers near the center of Alaska. It’s a town of about 500 people where they had built their own house and cultivate a small garden of homegrown vegetables during the summer. The couple enjoys fishing and guiding novice mushers around the state.

Zirkle came to Alaska to work for the United States Fish and Wildlife Service and developed a love for sled racing along the way. She finished second in the 2012 Iditarod and is a favorite of many to win this year’s race. As of Thursday she remains in 9th place.