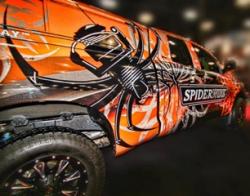 SpiderWire pro-team members Bobby Lane and Fletcher Shryock unveiled their 2013 boat wrap design. The popular SpiderWire logo will be prominently displayed as the two pros traverse the B.A.S.S. circuits this year. This is Lane’s third year on the SpiderWire team and Shryock’s first.

Lane, competed in the 2013 Bassmaster Classic finishing 15th. His Phoenix 920 and Toyota Tundra include eye-catching yellow and black SpiderWire wraps.

Fletcher, a second year pro out of Newcomerstown, Ohio, and his Z9 Nitro and Toyota Tundra will be easily recognizable with a distinct orange and black look for 2013.

“I can’t wait for the fans to see the SpiderWire wrapped Nitro and Tundra,” said Shryock. “On the Nitro, the wrap is pretty aggressive and I’m ready to open it up on the water when we hit the Sabine River System. I think it will really stand out when I am competing this year.”