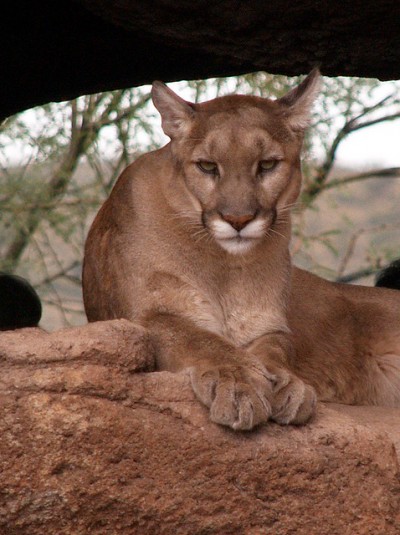 A relaxing hike quickly took a turn for the worse when Dave Nash was confronted by a mountain lion last week.

The meeting was unexpected. The trail Nash favors near his Rocklin, California home isn’t usually known for cougar sightings, and he never felt threatened before. According to ABC News10, the only precaution he took was a flashlight that had a whistle attachment, something Nash grabbed on a whim. It may have very well saved his life.

“I was walking along and I hear this noise off to my left hand side, just about five feet away,” Nash told ABC News10. “And the mountain lion came out, it kind of came out of the bushes off this ledge.”

He was at first excited to see the cat, despite its large size.

“It looked huge when I first came up on her,” Nash told CBS13. “I just thought, ‘Wow, what a privilege to see such a beautiful creature.’”

However, curiosity turned to dismay as he realized the mountain lion had no intentions to leave. Nash continued to face the cat until he knew he had to do something. Running from a mountain lion is generally a bad idea, as they associate that with prey animals. After a tense few minutes, Nash risked taking out his phone and calling 911. The operator patched him through to a warden with the California Department of Fish and Wildlife, who instructed him to use the whistle and flashlight.

Nash held off the animal for about nearly forty minutes as it slowly circled him, waiting for him to tire. With the sky getting darker, Nash feared an immediate showdown.

“I grabbed closest thing I had for a weapon,” Nash said. “I was ready to brawl if need be.”

Even so, against a large cougar Nash had slim hopes for a favorable outcome.

“I could see her eyes at 20 feet away from me, coming at me fast,” he recounts as the mountain lion moved in on him. Nash waved his arms over his head and started yelling at the animal.

Then suddenly, he was rescued. A California Highway Patrol helicopter descended down on the stalemate and used the onboard searchlight to scare off the cougar. Nash managed to escape the encounter with no injuries.

“I’m never going to forget it,” he said. “I learned a lot, and I have a lot of appreciation for law enforcement.”

Experts advise standing your ground when confronted by a mountain lion. Try to appear as large as possible and make loud noises. Gather any available weapons but do not bend over if possible. If the animal begins attacking you, fight back aggressively and try to stay on your feet.

As always, precaution is better than a few rounds of bare-knuckle boxing with a cougar. When in mountain lion territory, go out in groups and avoid the time between dusk and dawn. A defensive weapon or long walking stick may also be prudent.

Officials believe this specific mountain lion was stalking Nash, and will be putting the animal down when it is found.

Update: The mountain lion involved in this encounter was shot and killed by a California wildlife warden. Many have spoken out against the killing as unnecessary, but authorities state that the cougar developed predatory behavior towards humans and was actively seeking them out. The warden was approached by the mountain lion and shot the animal when it prepared to pounce towards him. The incident happened near Colfax.

Image from Jöshua Barnett (contemplicity) on the flickr Creative Commons