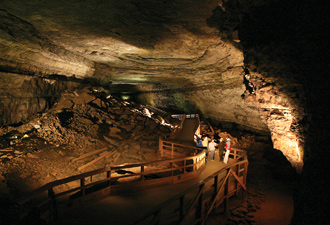 Visitors on the Broadway tour in Mammoth Cave, one of the most-visited parts of the park

Caves are all around you at Mammoth Cave—in the hills, and under your shoes. The longest cave in the world is here, waiting to show you things you’ve never seen before—geologic marvels, natural museums of stone, strange creatures, and hidden rivers. Stories of ancient cultures and intrepid explorers echo through mysterious chambers.

Discover adventure in the cool, dark, silence of Mammoth Cave. Year round (excepting December 25) the park offers ranger-led cave tours that vary in distance and time.

You’ll also find adventure on the surface side of Mammoth Cave National Park, in the park’s steep hills and deep hollows.

Mammoth Cave isn’t just a dream trip—it’s also a practical one for budget-minded travelers. In addition to its natural phenomena—a mammoth cave, rugged terrain, and scenic river valleys—Mammoth Cave National Park, in south central Kentucky and just off I-65, is within a day’s drive of one-third of the residents of the United States. Come visit for a week or a weekend.