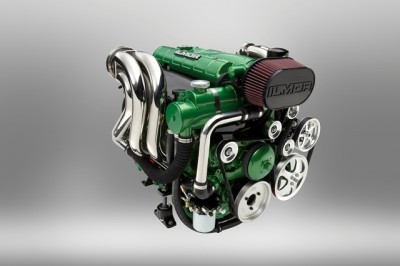 On its tenth anniversary in the marine industry, Ilmor High Performance Marine unveils its latest power plant, the MV8-570 high performance marine engine, at the 2013 Miami Boat Show. The new engine is featured in Ilmor’s display inside the Miami Beach Convention Center (R99/101) as well as installed in the 2013 Formula Boats 353 FAS3Tech at Sea Isle Marina.

“Ten years ago we entered the marine world with the goal of changing the way boaters think about their engines,” said Paul Ray, President of Ilmor Engineering. “The MV8-570 is the culmination of this goal after a decade of marine experience and two years of very intensive engine development. We wanted to merge the best of our two marine engine lines via our existing 7.4L engine – the new ‘454’ of today’s generation. We can now fill the need for a modern, compact, well-rounded performance engine for pleasure and high performance boaters alike.”

The new Ilmor MV8-570 will be offered in a variety of configurations, including an entry-level version for the cost conscious buyer and an upgraded appearance package – 570X – which features polished sport-tube headers, billet pulleys and custom engine covers. Appearance accessories will also be available for after-market purchase and installation. Compatible with various drive systems for new installations or repowers, Ilmor will offer the MV8-570 in complete packages with drives produced by long-time partners Teague Custom Marine and IMCO Marine.

The MV8-570 engines will make their on-water debut in the Formula Boats 353 FAS3Tech located at Sea Isle Marina. Ilmor and Formula partnered together for the first production installation of the MV8-570 after several successful installations of Ilmor’s existing high-performance MV10 and INDY drive systems in the 382 FAS3Tech and 400 Super Sport models.

“Formula is honored to partner with Ilmor Marine in launching their latest creation, the Ilmor 570, in the Formula 353 FAS³Tech.,” said Scott Porter, President of Formula Boats. “The new Ilmor 570s are an exciting visual blend of bright red, black carbon fiber and gleaming stainless steel and deliver 570 H.P. at 6000 rpm from a 7.4 L Chevy racing block, made magic over by the Ilmor Team. Our partnership began when we installed their 725s and Indy drives in our 400 Super Sport, and that evolved to the 382 FAS³Tech. Ilmor Marine’s association with Penske Racing delivers products and service levels you would expect from a world-class organization. While we installed the new Ilmor 570s in a 353 FAS³Tech, I believe it will be an awesome package in our 382 FAS³Tech also. Formula looks forward to our partnership in this effort to delivering an outstanding customer experience on the water.”

To learn more about the MV8-570 engine or Ilmor’s other marine engine offerings, visit http://www.ilmor.com.