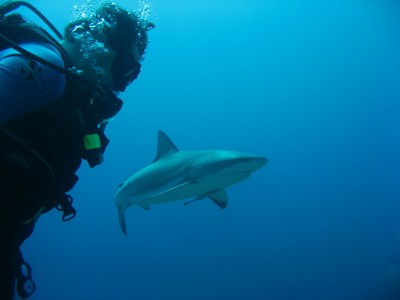 Researchers at the University of Florida report that 2012 saw the highest number of shark attacks on Americans since 2000. There were 53 incidents last year in comparison to the relatively low 31 in 2011. However, according to scientists, worldwide shark attacks have not increased dramatically. So why are sharks “targeting” Americans?

Researcher George Burgess says it might be linked to the economy. He believes in the past with the economic recession, fewer people have had a chance to visit the beach or otherwise engage in other aquatic activities. Now with an economic upturn, more vacationers are beginning to get their feet wet again.

“We could reduce risks by avoiding areas and times when sharks are most common, and where danger is at its highest,” Burgess said. He specifically points out western Australia, which is a known focal point for great whites during certain times of the year.

Florida logged the most attacks in the United States with 26. Hawaii came in second with 10. Once again, most of the victims were surfers. Sharks often mistake surfers for something more edible, like seals. There were seven fatalities worldwide, with one in California.

Burgess stresses that the sharks themselves have not shown to be more aggressive than normal. Rather, a number of factors are leading to a decline in the shark population. Marine conservationists often have the species as a top priority in their efforts. Although shark attacks are extremely rare, experts advise being aggressive if being attacked or bit. Hitting the shark on the nose is especially effective, as sharks are not normally used to a fight.

Image from Barnaby Dorfman (Barnaby) on the flickr Creative Commons