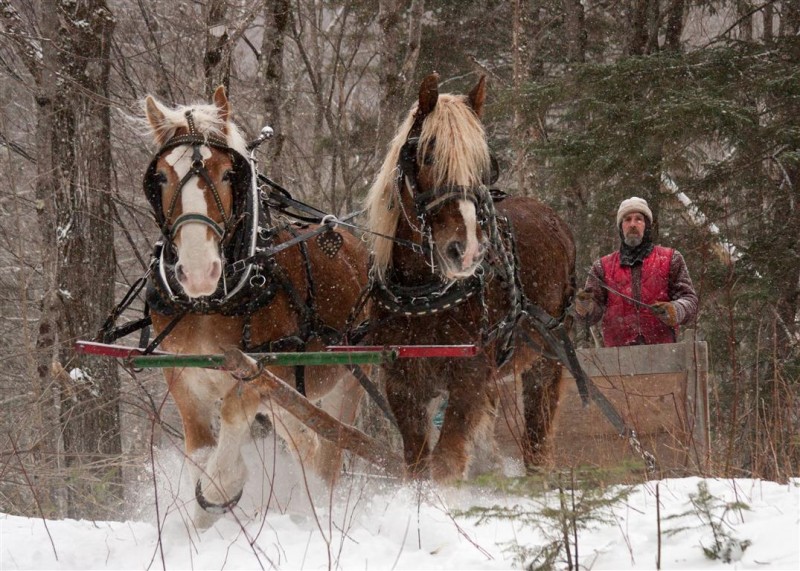 Draft horses are being used in New Hampshire's White Mountain National Forest to haul out debris in wilderness areas that ban power tools and motorized vehicles.

They are old-school gentle giants. Some can weigh upwards of a ton with well-sculpted muscles, enchanting manes and spectacular coats tinted by the season.

They are also powerful tractors.

Associated in modern times with beer commercials and laughing all the way on romantic open sleighs, the draft horse is a work horse in New Hampshire’s White Mountain National Forest (WMNF).

Since wilderness areas ban the use of motorized vehicles, bulky draft horses have been enlisted to serve as old-fashioned powerful machines in the forest.

Under a partnership between the Forest and the non-profit Draft Animal Power Network (DAPNet), teams of horses are being used to pull out what remains of defunct bridges in certain parts of the popular forest some 130 miles north of Boston.

“We are extremely pleased with the success of the project and how well wilderness management practices line up with DAPNet’s mission,” said WMNF Wilderness Manager John Marunowski. “It is exciting to observe the raw, primitive power of the animals and see its application not only on farms and fields but on public land as well.”

The Wilderness Act of 1964, White Mountain National Forest Plan standards, and wilderness management practices dictate that only primitive forms of transport and tools are to be used within federally designated wilderness areas. This precludes the use of both motorized and mechanized equipment such as power tools, motors, and even wheels.

The 45,000 acre Pemigewasset Wilderness is in the heart of the White Mountains and used year-round by hikers, cross-country skiers, and snowshoers. With a history tied to logging and railroads in the late nineteenth and twentieth centuries, the area includes the Franconia, Twin, and Zealand mountain ranges.

A few years ago, employees removed a pair of bridges about six miles into the Pemi. According to the U.S. Forest Service, the bridges were removed due to safety concerns and the need to preserve the wilderness character. The bridges were disassembled by hand and components were stacked along the trail awaiting removal by non-motorized means.

Since the disassembly of the bridges, the WMNF has been removing the components with the use of human power during both summer and winter.

Despite this, there was a challenge. How to remove the 16 I-beams, each weighing 900 pounds.

An estimated 15,000 pounds of material was pulled from the debris site.

That’s where the horses rode in.

DAPNet, a non-profit group comprised of farmers, foresters, loggers, and others interested in using animals for power and as a sustainable means to support local communities and land-based economies, believed it could be part of the solution.

After members toured the site, it was decided the horses could use the old railroad lines that were used to haul timber out of the area to pull the I-beams.

A three-day window of opportunity was opened in late January to allow for the work to be done. On January 28, two teams of draft horses made their way to the site where they hauled out the first two loads of steel.

Since the horses could not navigate over the brook which was midway along the trail while pulling loaded sleds, the steel was transferred to a highline system at that point. It was winched across the brook by Forest Service personnel to where the draft horse team picked it up again and hauled it the rest of the way out of the wilderness. That evening the horses and crew from DAPNet braved the extremely cold weather camping in a canvas tent, complete with a wood stove, close to the project site.

The next day, the draft horses and their crew along with Forest Service personnel sprang back into action completing three more loads.

The loads were pulled to the wilderness boundary, where the WMNF plan to use motorized equipment to transport the debris the remaining three miles to the trailhead.

In total five loads, an estimated 15,000 pounds of material was pulled from the debris site including steel, and heavy, creosote-laden lumber from the footings of the bridge.

Nothing like a dose of yesterday’s know-how to solve today’s problems.