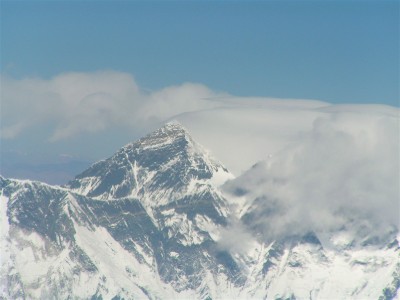 As much as they may want to parachute or rappel down onto the peak, six Air Force academy graduates will soon be footslogging up Mount Everest. At nearly 30,000 feet, the Everest summit remains a holy grail in mountain climbing, reserved for the most experienced and prepared climbers. These airmen began their love of mountaineering much lower and earlier as cadets in the Colorado mountains.

“We were always in the mountains,” Capt. Marshall Klitzke said. “Since then it’s stuck with me. In mountaineering, everything just kind of slows down, you’re very much in the moment and everything else in life just kind of fades away.”

According the U.S. Air Force website, Capt. Klitze scaled 27 peaks as an academy cadet, and combined with the climbing credentials of the rest of the six man team, they will have have climbed the tallest mountains in every continent except one. Everest awaits.

The world’s best known mountain is at the end of a quest for greatness, not only for the airmen, but for the charities they represent. Behind Capt. Klitze and his team is the Air Force Seven Summits Challenge, which raises donations for veteran groups for every one of the seven mountains summited. These peaks are no small hills either, with names such as Kilimanjaro, McKinley, and the treacherous Antarctic Mt. Vinson counted among them. With the summit of Everest reached, the academy graduates will be the first American armed forces team to do so, and the first in the world to have scaled the highest mountain in every continent.

The team is preparing for the harsh climate with extensive physical training and breathing exercises. Klitze says he intends to lead the team at a slower pace in order to acclimatize to the conditions and reduce risks. Climbing Everest is a dangerous proposition, even for these experienced mountaineers. The team will meet in Nepal this March for the climb.

Image from Thomas Wanhoff (thomaswanhoff) on the flickr Creative Commons