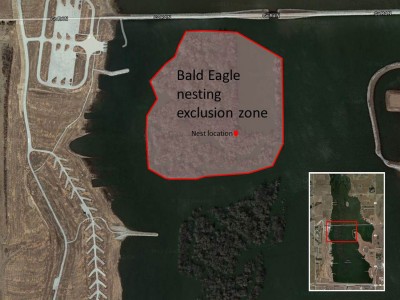 Ice anglers and other visitors to Lake Wanahoo State Recreation Area (SRA) are asked to comply with an exclusion zone implemented to protect the lake’s nesting bald eagles. The exclusion zone is an area closed to all access from Dec. 1-July 15.

Bald eagles are particularly sensitive to disturbance during the early portion of their breeding cycle, which includes courtship, nest building and maintenance, and egg-laying. Bald eagles may begin courtship or nesting building activity as early as December or January, but activity increases in February and the first eggs are usually laid by early March.A pair of bald eagles first built a nest at Lake Wanahoo in 2011. They produced two fledglings in 2011 and two more the following year. The nest is located in a large, dead cottonwood in the lake near the boat ramp.

Bald eagles incubate their eggs for about 35 days. The chicks grow quickly, but it will take another 70-90 days for the chicks to fledge. Once fledged, they will still remain near the nest and dependent on their parents for some time.

“We are asking our SRA visitors to help us protect these magnificent birds,” said Joel Jorgensen, nongame bird program manager with the Nebraska Game and Parks Commission. “Hopefully, the resident breeding pair will return to their nest very soon and begin breeding activities.”

Bald eagles are protected by the federal Bald and Golden Eagle Protection Act, which prohibits anyone, without a permit, from “taking” bald eagles, including their parts, nests, or eggs. “Taking” includes killing or harming bald eagles but also includes disturbing nesting bald eagles. A violation of the Act can result in a fine, imprisonment for one year, or both, for a first offense. Penalties increase substantially for additional offenses, and a second violation of this Act is a felony. Individuals who observe violations may call the Nebraska Wildlife Crimestoppers at 402-742-7627.

The Lake Wanahoo eagle nest also offers excellent wildlife viewing opportunities. The nest can be seen from several different areas around the SRA and is easily viewed with binoculars or a spotting scope.