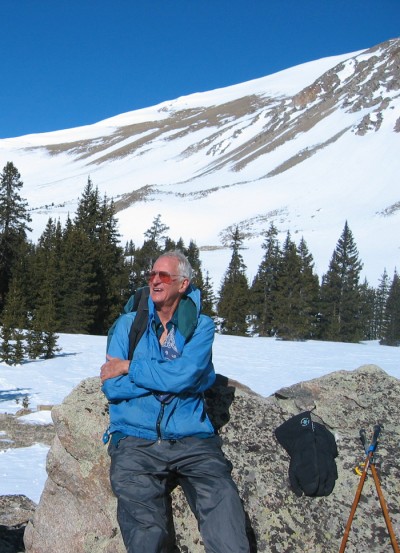 For a man who claimed he was “nearly petrified” by the risks associated with the sports he loved, Bill Forrest certainly made a lasting name for himself in the mountain sports industry. Many are now mourning the death of 73-year-old Forrest, who passed due to natural causes while snowshoeing near Monarch Pass, Colorado on December 21, 2012.

Forrest traveled around the world creating new routes and summiting impressive peaks including all of Colorado’s fourteeners (mountains 14,000 feet or more in elevation), of which there are more than 50. He was the first to ascent the Forrest/Walker in 1972 in the Black Canyon of Gunnison, which was a 2,500-foot line on the Painted Wall, then-unclimbed. In an interview with the Denver Post, Forrest recalled how he almost died on the 24th pitch, a moment he thought about occasionally for the rest of his life. He also made the first ascent of the Gothic Nightmare in the Mystery Towers of Utah.

He began climbing in the Army and honed his skills while he was stationed in Germany. Forrest accomplished his first complete ascent at the age of 12 when he summited Longs Peak with his Boy Scout troop at the age of 12. His climbing career essentially came to an end after a 1993 attempt at Mount Everest. He came down the mountain with amoebic dysentery, which nearly killed him and stifled his ability to climb. The attempt led to a long relationship with MSR (Mountain Safety Research), a manufacturer of mountain gear for which Forrest designed and patented various snowshoe designs. From an MSR press release:

In the winter of 1994 … Bill showed the company a prototype of an innovative new snowshoe he had built—the Forrest snowshoe. The snowshoe was plastic molded with steel traction bars lining the length on each side, steel crampons, and modular tails that could be interchangeable to allow for more flotation when needed. The brilliant design concept came to Bill in the winter of 1993-94 while training for a climb on Mount Everest’s North Ridge by climbing 14,000 foot Colorado peaks, for which he needed snowshoes with more durability and traction than were available at the time.

Early in 1995, MSR purchased Forrest’s snowshoe design and hired him as a full-time employee to develop the snowshoe. In August of that year, MSR successfully showed the new Denali snowshoe at the Outdoor Retailer tradeshow and made its first sales of the product. Since then, design improvements have been made every year but the original concept of Bill’s snowshoe continues to stand the test of time and has become one of MSR’s best-selling products—the Evo Ascent snowshoe.

In the fall of 1999, while freelancing with MSR, Bill came up with another great idea and showed the company his revolutionary concept for the ‘White Lightning’ snowshoe. The concept featured 360-degree perimeter traction, exceptionally light weight, vertical crossbars for additional traction and open tension buckles for simplified binding attachment. MSR worked with Bill to evolve this concept into what is now the MSR Lightning Ascent snowshoe, the pinnacle of light and aggressive snowshoes for all-terrain performance.

A memorial service for Forrest will be held on January 13 at 2 p.m. at the First Presbyterian Church in Salida.