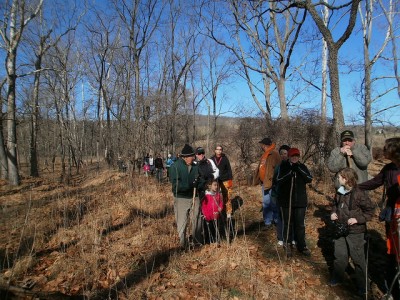 Over 22,000 people across the nation greeted the New Year by getting “naturally healthy” hiking in a state park on New Year’s Day. For the second straight year, all 50 states hosted America’s State Parks First Day Hikes, offering 721 hikes across the country. As a nation, 22,022 First Day Hikers logged a total of 43,911 miles on January 1, 2013 in hikes that ranged from 1 mile to 9 miles round-trip. The annual event, sponsored by the 50 state park systems throughout the nation, highlights our state parks as providing year round recreation and promoting healthy lifestyles.

“We are thrilled that so many people across the nation started 2013 in one of America’s State Parks by joining us for a First Day Hike,” said Priscilla Geigis, President of the National Association of State Park Directors (NASPD) and Director of Massachusetts State Parks. “Our state parks are places to get naturally healthy through physical exercise and connecting with nature close to home. We hope this experience inspires everyone to continue to enjoy these valued resources throughout the year.”

“We have so many incredible places to explore right in our own backyards,” added Dr. Phil McKnelly, NASPD’s Executive Director. “Every season is the best season to be in a state park and First Day Hikes are the perfect opportunity to burn off some of those holiday calories with a brisk hike.”

Hikers across the nation, some veterans and some visiting a state park for the first time, shared enthusiastic comments with their guides. “We would never have been to this park if it weren’t for this hike. We plan to return!” said one man who was with his family and among 247 hikers at Valley of Fire State Park in Nevada. The park hosted 12 hikes including one which began at 11 p.m. on December 31st and ended in the New Year. Leslie Patton, who hiked the South Rim Trail at Roxborough State Park in Colorado said, “Wow, what a beautiful way to begin the New Year!” Others across the county remarked, “This is great!” and said they looked forward to making these hikes an annual tradition.

The majority of hikes were moderate, attracting a wide audience including kids (and babies in backpacks), adults and some dogs. However, some locations offered more strenuous options for people looking to get their hearts pumping in the New Year! Red Rock Canyon in California hosted the longest hike at 9 miles round-trip.

Mother Nature joined the hikes bringing cold, fog, snow and rain to some places and sunshine and balmy weather to others. While some hikers bundled up, others brought suntan lotion and bug spray. Hikers traversed trails with stunning views of mountains, prairies and the ocean and walked along seashores and within forests.

Hikers observed a diversity of wildlife including songbirds, fox, rabbits, deer, bald eagles, quail, geese, elk, and ermine to name a few. Native American pictographs were seen while hiking the trail at Hueco Tanks State Park in Texas. When finishing their hike at Sebago Lake State Park in Maine, participants heard the cry of a Common Loon in the bay. At O’Bannon State Park in Indiana, the two resident oxen and two donkeys accompanied the ranger and visitors on the trail. And at Missouri’s Prairie State Park, visitors witnessed two bison herds join together and take off in a dead run across the prairie. “It was awe-inspiring!” exclaimed hike leader Dana Hoisington whose excitement was echoed by others

At Golden Gate Canyon State Park in Colorado, with the thermostat registering 5 degrees Fahrenheit, six brave souls donned snowshoes for a one mile hike through a beautiful stand of aspen.

At Alaska’s Independence Mine State Park, hikers strapped on skis and joined Ranger Amy O’Connor as they toured a trail that led to a historic mine and learned about what life was like when the mine was operational.

Over 500 early risers walked the scenic Makapuu lighthouse trail at the Ka Iwi State Scenic Shoreline, in Oahu, Hawaii to see the first sunrise of the New Year, ushered in by a Hawaiian chant and taiko drums.

Many parks added their own creative elements. At Blackstone River and Canal Heritage State Park in Massachusetts, visitors launched their hike with a sing-a-long of “These Boots are Made for Walking,” led by Ranger Jeanne Gilleney-DeCenzo. “Auld Lang Syne” was the choice for hikers when cresting the Mirador Scenic Overlook at Cerrillos Hills State Park in New Mexico. Ludington State Park in Michigan hosted a lantern lit snowshoe hike while visitors saw ruins of a fort at Churchill State Park in Maryland. Hikers at Fort Bridger State Park in Wyoming received pins commemorating the 75th Anniversary of Wyoming State Parks and Historic Sites. Abeliene State Park in Texas added a self-guided scavenger hunt to their hike. And showing nature has no borders, North Carolina and South Carolina State Parks co-sponsored a hike at Kings Mountain State Park.

In addition to getting exercise, enjoying natural and cultural features and viewing wildlife, hikers learned about the history of their parks and the integral role of the Civilian Conservation Corps in creating national and state parks. In South Dakota, visitors heard about Lewis and Clark’s experience at Spirit Mound Historical Prairie.

As part of this effort, many parks provided refreshments for hikers ranging from traditional hot chocolate, cider, soup and New England clam chowder in colder climates as well as healthy snacks such as granola and fruit. In Arkansas, folks who hiked past towering bluffs and historic homesteads at Lake Fort Smith State Park celebrated their 3 mile trek down the Ozark Highlands Trail with black-eyed peas and cornbread. Canines in Indiana who hiked the trail were rewarded with dog treats at Indiana Dunes State Parks.

For photos and news stories about America’s State Parks First Day Hikes 2013, log onto the website at http://www.americasstateparks.org.